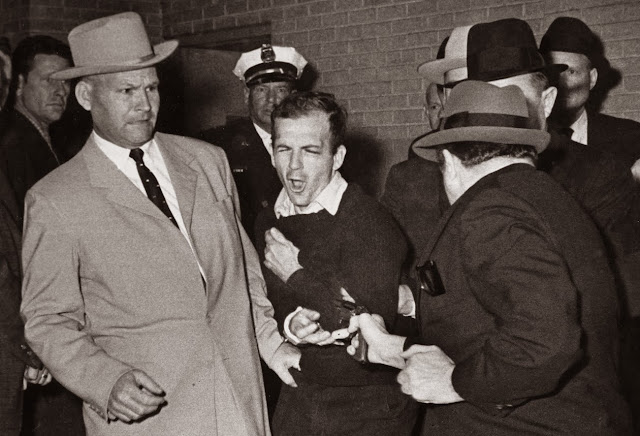 This is incredible. David Von Pein puts up this Jackson photo, and he says:

"Oh, for Pete sake, Ralph. Isn't it obvious what that "blackness" is there? It's Oswald's SWEATER, not his wrist. His black sweater is bunched up in that "half moon" area, obscuring a portion of his skin. And the other blackness that you think looks abnormal is merely the end of the sleeve of Oswald's sweater. "

RC: Ah, yeah, duh, anything black has to be sweater and not skin. I knew that, David. Oswald's skin wasn't black. So, was it even necessary to say it? Were you under the belief that I was calling something black his skin?

So, to clarify, there is a straight part which refers to the juncture of the end of his sleeve and his wrist, and there is a half-moon part, which is also a junction of sweater and skin. 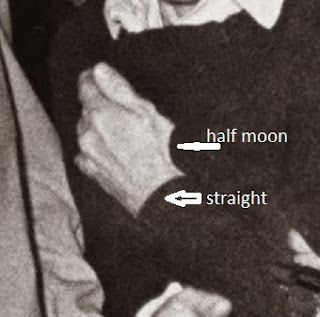 So, you say the sweater is bunched up in the half moon area? Well, let's test it and see if it bunches up and covers any part of my hand. 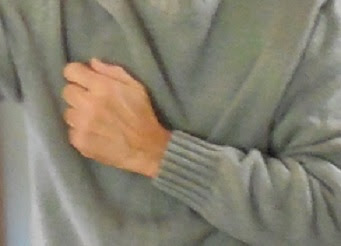 So, I did not get that effect. As you can see, I just got the straight wrist with the end of the sleeve coming down to it, and no half moon going over my skin. You said that the sweater was "bunched up and obscuring a portion of his skin." What portion of his skin did you mean? Because: none of my skin got obscured. But, you are saying that the half moon is a bulge in his sweater that was  covering up his skin? Well, in that case, let's get rid of it and see the skin. 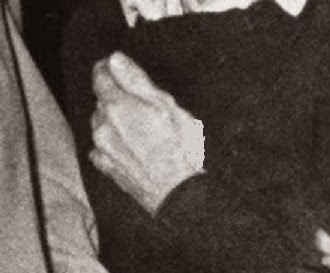 So, is that what you're claiming? That a bulge in the sweater was covering up part of his hand? But, before you can claim it, you've got to demonstrate that it's even possible. Here, I am plainly showing that it doesn't happen. My hand is over the sweater. The sweater is bunching, but no "bunch" is affecting my hand or obscuring my hand or covering up any part of my hand. We can see my whole, entire hand. 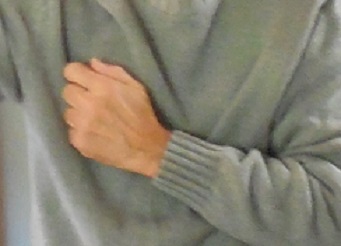 So, before you or the Indian or the Pink Guy or anyone else makes any more claims about "bunching" or "puffing" of the sweater, resulting in the covering up of any part of his hand, you need to demonstrate it with a camera because I am categorically denying the validity of it. It's bull shit. It's just more crap being spewed by crap-spewers.   We are seeing my entire hand. No part of my hand is being obscured by my sweater. And until you demonstrate it with a camera, you CANNOT claim that any part of Oswald's hand is being obscured by his sweater. As I've told you, I don't make the rules; but I do enforce them.

In reality what is happening in that photo is this: 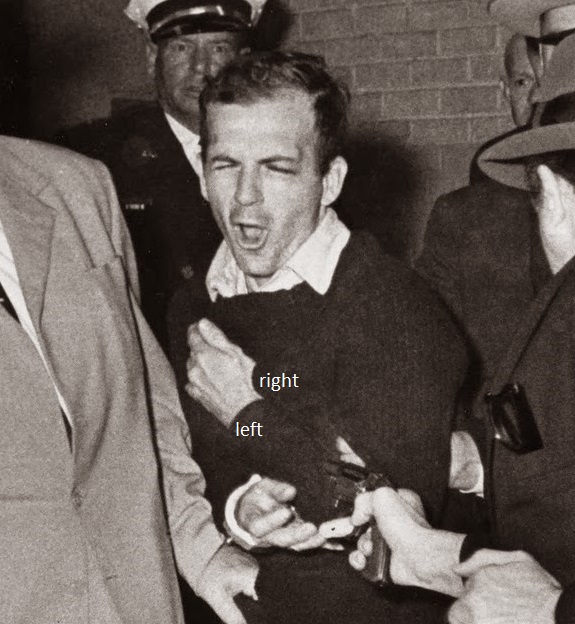 And I am very proud and happy to say that our newest senior member, Robert Jordan, has contributed his own handiwork to this effort. 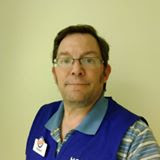 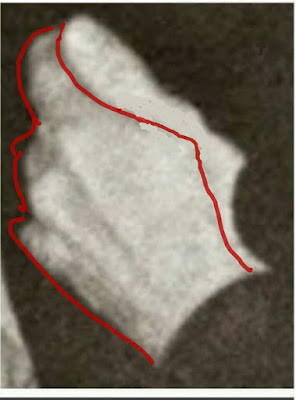 That is a VERY good approximation of the division between those two hands. On the right hand, we see only the thumb and no other fingers. And on the left hand, we're seeing the index finger and two other knuckles; there is a finger missing.

Now listen, David. This has gone on long enough. I am fed up with your lip-flapping. I don't care what you think. I am not interested in what you spew. If you are going to claim anything, you God-damn better demonstrate it with a camera. This is serious! This is about the truth concerning the JFK assassination.  And neither yours nor anybody's lip-flapping has any importance. You demonstrate with a camera the claims you are making. And if you don't, then you are spewing not just your own crap, but the blood of John Fitzgerald Kennedy.
Posted by Ralph Cinque at 11:09 PM