What gives anyone the right to assume that just because Oswald sometimes read the newspaper during his lunch break that he must have learned about the motorcade route?

We don't know if he ever handled a newspaper which contained that information. And if he did, we don't know if that information ever caught his eye. It was a newspaper, and people don't read newspapers. That is, they don't read them from beginning to end, as they do books. They scan newspapers. They skim through them. They flip through them. It's an easy, breezy kind of thing. We all know that. And, whatever articles they read, they may only read part of them.

But, there's more: even if Oswald did handle a newspaper which had that information, and even if he did stop and dwell on the article which contained it, and even if he did reach the part in the article which laid out the motorcade route, what basis is there to assume that the idea of shooting Kennedy would jump out at him just from seeing the motorcade route?

What I mean is that the idea about the practicality of shooting Kennedy from the Book Depository was not a given. It wasn't automatic. It wasn't something that was going to hit him like a thunderbolt just because he saw a motorcade route in a newspaper. Did he ever have the experience of standing at that 6th floor window and thinking that he could easily pick off a passing motorist? I strongly doubt it. Did he ever do any such shooting before, such that it would register as a thought in his mind? No, definitely not. Moreover: THE ARTICLE DIDN'T SAY THAT KENNEDY WOULD BE RIDING IN A CONVERTIBLE WITH THE TOP DOWN. Without that, you've got nothing, right?

Here, from Professor John McAdams, is the Dallas Morning News article from Tuesday, November 19. Notice that it says nothing about JFK riding in an open convertible. 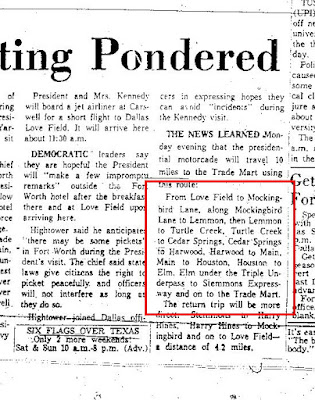 Here is the Dallas Times Herald. Again: no mention of an open convertible.

Note also that neither article says anything about the motorcade moving at an extremely slow speed. Nor did it say anything about it stopping. In the Kill Zone on Elm Street, the limo either stopped completely, or at the very least slowed down to less than 5 miles per hour. And you know that's true because how could Jean Hill speak the following to JFK if his car was moving any faster?

"Mr. President! Look this way! We want to take your picture!"

JFK was supposed to hear that and respond accordingly so that Mary Moorman could take his picture all while his car was passing them? Two people standing close together? How long does it normally take for a car to pass somebody?

Of course, the ridiculousness gets even worse because there are NO prior violent acts that can be attributed to the Oswald of fame. Did he shoot at Walker? No, he did not, and you just have to read this piece to know that:

Did he commit violent acts in the Marines? No, he did not, and you just have to read John Armstrong to know that. There were two Lee Harvey Oswalds and both of them were in the Marines. One of them got charged with crimes, including violence, but it wasn't the Lee Harvey Oswald of fame. This page below by John Armstrong lays out the dual Marine experiences of "Harvey" and "Lee".

Listen: you are never going to have an understanding of the JFK assassination if you don't get into John Armstrong. That is just the way it is.

So, what's left in the way of violent acts for the Oswald of fame? There is his supposed beating of Marina, but John Armstrong does not believe it either. And keep in mind that he is a friend of Marina, and he spent two weeks as a guest in her home. Furthermore, if you read Marina's testimony to the Warren Commission, you get the clear impression that they were pressuring her to say it, and she wasn't comfortable about saying it- that he beat her.

Mr. RANKIN. Do you recall that you called Mrs. Meller and told her about your husband beating you and she told you to get a cab and come to stay with her?
Mrs. OSWALD. Yes, but he didn't beat me.
Mr. RANKIN. And you didn't tell her that he had beat you, either?
Mrs. OSWALD. I don't think so.

And, I realize that if he didn't "beat" but he instead slapped her or pushed her or did anything forceful to her at all, even once, it was wrong, terribly wrong. But still, it has no bearing on enabling him to shoot a man dead with a gun. They are two different things. You can't make that leap.

So, the Oswald of fame lacked a past history of violence, including the complete absence of any propensity or inclination to commit murder, and he also lacked completely any resentment towards, dislike of, or grudge against John F. Kennedy.

It's interesting that Vincent Bugliosi never framed Oswald's motive as anything personal against Kennedy. He did not connect it to any policy or action of Kennedy- involving Cuba or anything else. To Bugliosi, it wasn't Oswald's hatred of Kennedy; it was his hatred of America. But, hate is a very strong word. What evidence is there of Oswald manifesting hate for anything, never mind hating enough to kill?

It comes down to state of mind. What evidence is there that Oswald was in a state of mind that the mere sight of a motorcade route in a newspaper would incite him with an impulse to commit murder?

So, in the end, even if he did handle the newspaper, and even if he did stop and read the article about Kennedy's visit, and even if he did register on the motorcade route, what reason is there to think that, based on what we really know of him, that it would have triggered in him this bizarre, psychotic, deranged, unhinged impulse to kill? It takes more than the sight of a motorcade route to do that. And why would he act on it without having any knowledge of an open convertible?

But, these are all moot questions because we know for an absolute fact that Oswald did NOT know about the motorcade route. And we know that from the testimony of James Jarman.

Now, to those who want to say that Oswald just said that to Jarman to create an ignorance alibi, I must admit, that irritates me because it is ridiculous. If Oswald got caught red-handed, claiming ignorance wasn't going to help him.

"I know I'm standing here with a smoking gun, and it looks bad; but I couldn't have done it because I asked James Jarman why people were gathering on the sidewalk. Just ask him."

And actually, Oswald wasn't caught red-handed, so if he created such an ignorance alibi for himself, why didn't he use it? He could have said:

"What? Me? Are you crazy? I didn't even know the President was going to be passing the building today. I asked James Jarman about the crowds. I didn't know why they were gathering out front. Just ask him."

Oswald could have said that. But, he didn't even think of it. And it shows that he did not have any consciousness about setting up an ignorance alibi for himself. He did not put on an act for James Jarman.

So, after all that silly speculation and unwarranted assumptions about Oswald having handled a newspaper and having read an article about Kennedy's visit and having registered on the motorcade route, it turns out that not a bit of it is true. Oswald did not know that the President would be riding by.

The official paradigm of Oswald's theoretical path to the 6th floor on November 22, 1963 is like a castle made of sand. You know how at the beach, it only takes one big wave to knock the castle down. Well, there are so many waves knocking at their castle, that it can't even be built, theoretically. It can't even stand for a second. They can't even keep one grain of sand in place. It's all irrationality and lies. Wicked, evil lies. Oh, what a bloodied web they've lain whenever, alas, they try to explain.