Tom Steyer, a hedge fund billionaire, is spending $20 million of his own money to impeach Trump. He says that Trump is the worst President ever. 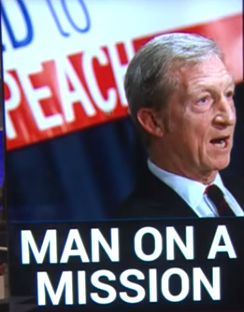 Trump? The worst ever? I have a very simple way of rating Presidents: he who kills the least is best.  Trump has killed. He killed 8 women and 7 children when he sent his Seals to Yemen. And he has killed a lot more than that in Syria and in Afghanistan.

However, George W. Bush killed many hundreds of thousands. That's absolutely certain and undisputed, but it is very likely that, between Iraq and Afghanistan, he killed over one million people. That's like the entire population of Austin, Texas, where I live.

So far, Donald Trump has been the least murderous of any modern President. Both Clinton and Obama killed a lot more in their wars and actions. The same is true of the recently departed George HW Bush. But, George W. Bush, undoubtedly, takes the cake for having spilled the most blood, and almost all of it innocent blood.

And realize that even when he killed, say, Iraqi soldiers, who were fighting back, he was mostly killing innocents. They hadn't done anything to us. Remember; we attacked them. They didn't attack us. They were just defending their country from an invader. And remember further, that the whole basis for both of George W. Bush's wars were lies. Lies, lies, lies. There was the lie that Osama bin laden planned and executed the 9/11 attacks from a cave in Afghanistan- while all the while on kidney dialysis. And there was the lie that Saddam Hussein was harboring weapons of mass destruction - which the U.S. has more of than any other country in the world, including nuclear weapons, which are the worst. It was only recently that I learned that the U.S. had explicit knowledge that Japan was suing for peace at the end of World War II, and we knew that BEFORE we dropped the atomic bombs on Hiroshima and Nagasaki. The truth is: we wanted to drop those bombs to send a message to the Soviets that we were going to rule the roost in the post-war era. That's really why we did it. The Japanese were ready to surrender, and all they asked is that we not go after their Emperor Hirohito, because he was just a figurehead politically, with no real power, but he was indeed a spiritual leader.

That was their only sticking point, but they even dropped that once we dropped the bombs. They made an unconditional surrender. But, you want to know something? We never did go after their Emperor. And he lived a long life too, until 1989. And he lived it a free man.

So, think about the irony of the one and only country that has actually used nuclear weapons, and against civilians, assuming the role of policeman of the world when it comes to nuclear weapons.

According to Johns Hopkins University researchers, George W. Bush killed a million people in Iraq alone. The hundreds of thousands he killed in Afghanistan have to be added to it. And all of that killing, in both cases, was based on and justified by lies. Lies, lies, lies, lies, lies.

And Steyer thinks Trump is the worst President? Money didn't make you smart, Mr. Steyer. In matters such as this, you might as well be a pauper because mentally, you are one.

And George W. Bush: you are a mass murderer. You committed genocide. You hear me? I'm talking to you.