Letter to two JFK researchers whom I shan't name who contacted me about the Moorman photo:

When I am about to tell you may come as a shock, but please don't reject it out of hand because much careful thought and analysis has gone into it, by me and others.

Mary Moorman did not take the Moorman photo. That isn't hers. Hers got replaced with the Moorman photo of fame. The scientific basis for knowing it is that Mary said at the time and many times thereafter that she snapped her picture when the Kennedys were directly passing her, when they were directly perpendicular to her. Here is she is demonstrating it with the now infamous Matt Lauer. 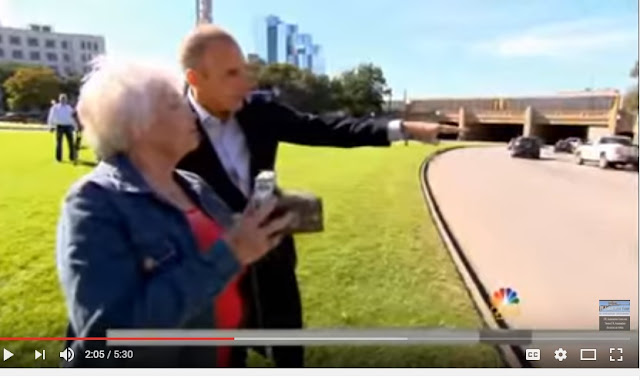 She was poised and ready looking through the viewfinder, and when they got to her, when they were exactly across from her, perpendicular to her, she snapped it.

So, she was facing them squarely, and they were passing her squarely, so everything was square. But, whoever took the Moorman photo shot it diagonally from behind. We know that because it's the back of their heads that got captured; because their heads are not centered in the picture; and because the angle of the limo with the bottom of the photo shows the diagonality; and because you see how the size of the motorcycle cop Hargis is huge compared to the Kennedys, which means that he was much closer to the camera than they were. 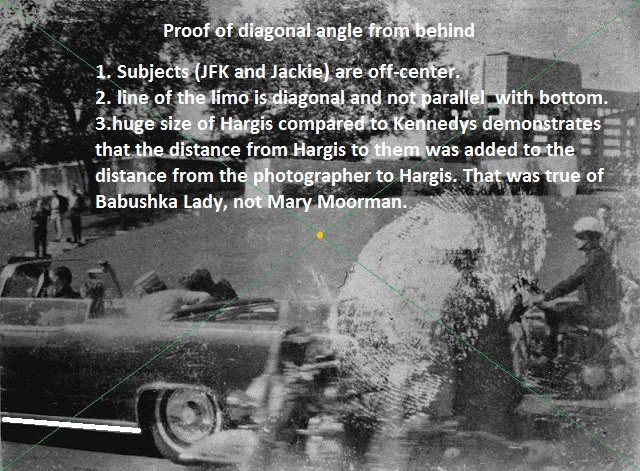 So, it was shot on a diagonal that went from the operator to Hargis to the Kennedys.

The only one who was in position to take such a photo was Babushka Lady. 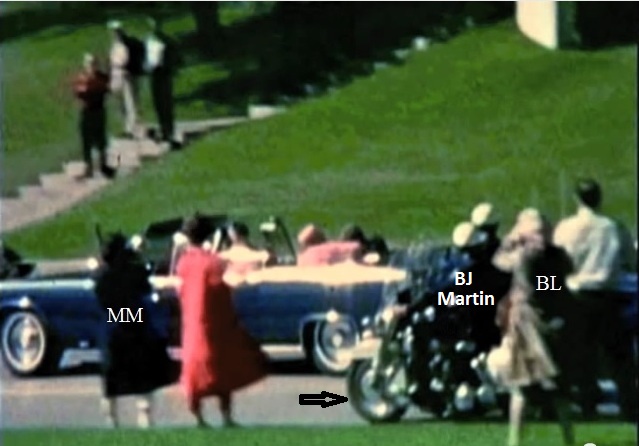 But, since she was behind not only Hargis but Martin, her picture captured both of them, while Mary, shooting from the perpendicular, only captured Hargis, who was forward of Martin. And that explains the necessity of the white thumbprint- to take Martin out of the picture since Mary's image didn't capture him. They kept the front wheel of Martin's bike and tried to make it look like Hargis' front wheel. THE PURPOSE OF THE THUMBPRINT WAS TO OBSCURE MARTIN, TO REMOVE HIM FROM THE PHOTO. 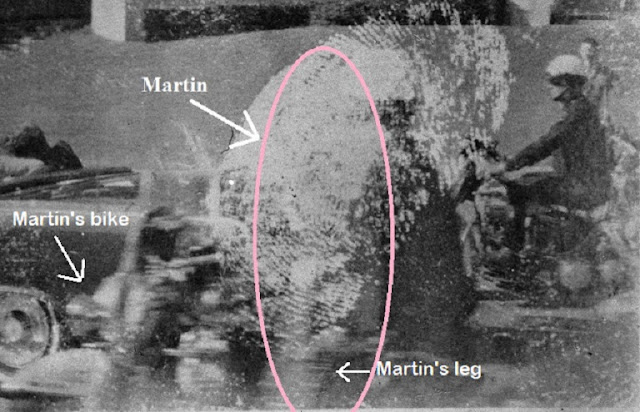 All all this matches the history very well, where they kept "borrowing" Mary's photo, over and over, and finally returning it to her with the "accidental" thumb print. It's apparent that Mary's own photo must have shown something that was absolutely lethal to the official story. What was it? I can only speculate, but I doubt it was some shooter in the distance because that would have been small enough to easily take out or obscure. I think more likely it was something going on with the Kennedys, something very telling in the limo.

And this also means that Babushka Lady was working for the plotters. She was probably somebody's wife. She was there to record the event. Notice how she prudently stayed farther back than the others, taking cover behind Charles Brehm. And notice how she bundled herself up with a long heavy coat and a head scarf that concealed her face. There is one image of her face with her scarf undone, but that image is fake.

I know this comes as a shock, but that's the way it is. Mary Moorman's photo got replaced with one that was taken by Babushka Lady, and Mary has never realized it. The physics and the optics are absolutely certain that the Moorman photo was taken on a diagonal from behind, but Mary did not take her picture that way. There is no reason to think she would let the Kennedys pass her before pressing the shutter, only to capture the back of their heads.  Ralph Cinque