I am convinced now that that guy coming off the elevator with the cops was NOT Oswald.  Oswald is on the left below. 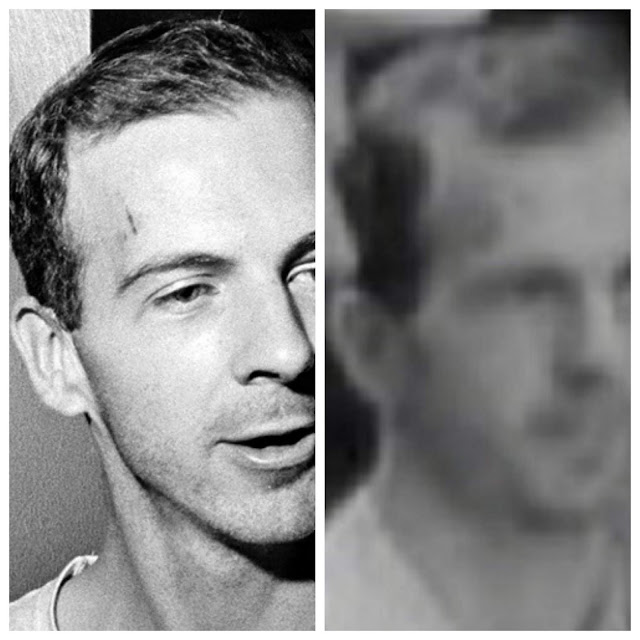 They had different ears. Oswald's was larger and longer, with a more prominent lobule (which is the lower, fleshy part where the ear ring goes). Oswald never showed such exposed recession on that side of his head, as we see on the right. There is no other image of him like that. Oswald's nose was not as small as the man's on the right. Oswald had more flare to his nostrils. And Oswald had more space between his eyes and his eye brows.

Now, let's compare that guy to Oswald in the Johnston photo. And note that these pictures were taken 10 seconds apart, and the one on the right first. 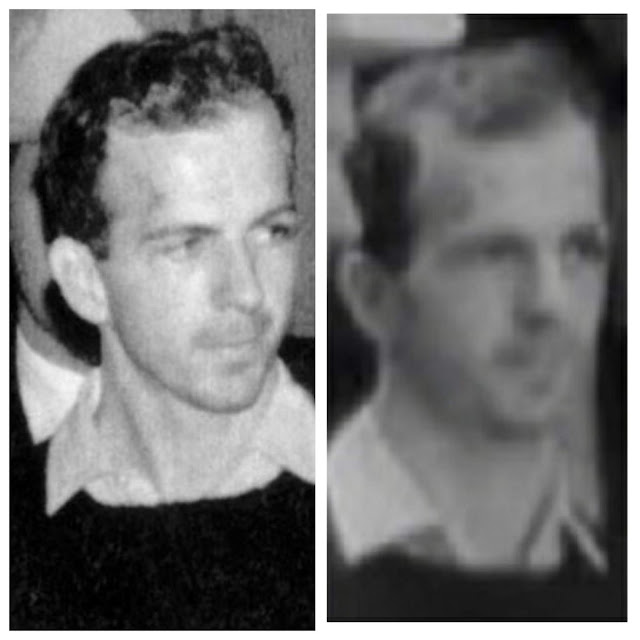 First, that is definitely Oswald on the left because that is Oswald's ear for sure. His nose is spot-on perfect- longer, larger and with more flared nostrils than the other. His hair is longer, as it should be, and without that huge recession. And the spacing of his eyes and eye brows works too. 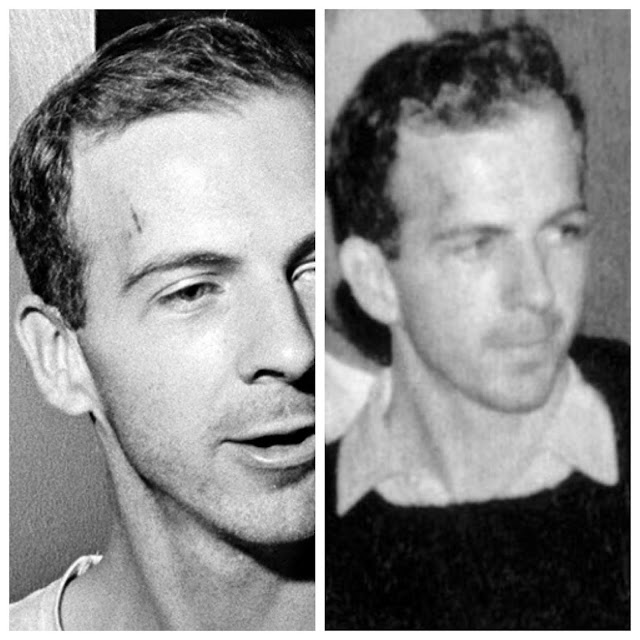 That is the same guy; same ear; same eyes and brows, same hair, same nose. You can even see the same prominence of the sternocleidomastoid muscle. You see that cord of muscle on both of them, right? But, this other guy had a stubbier nose, shorter hair, more recession, and a very different ear. 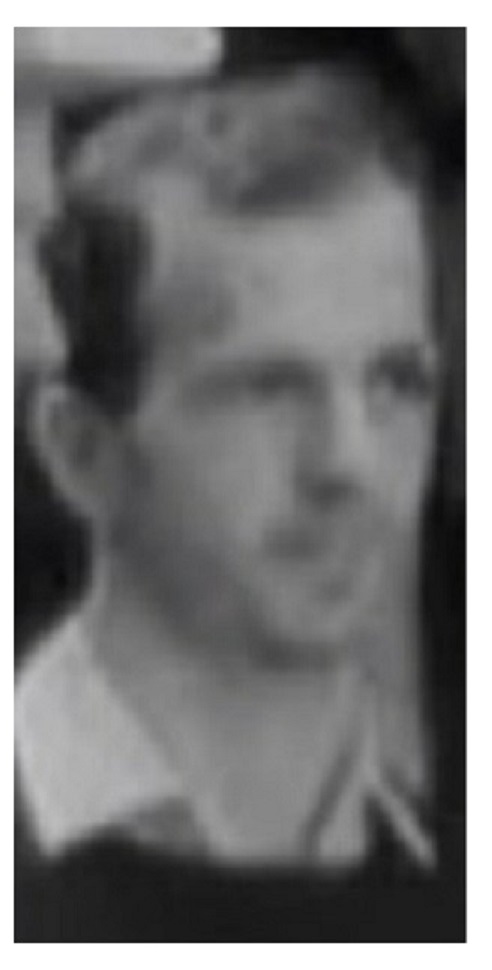 We better keep going with this. Let's compare him to the Jackson Oswald. 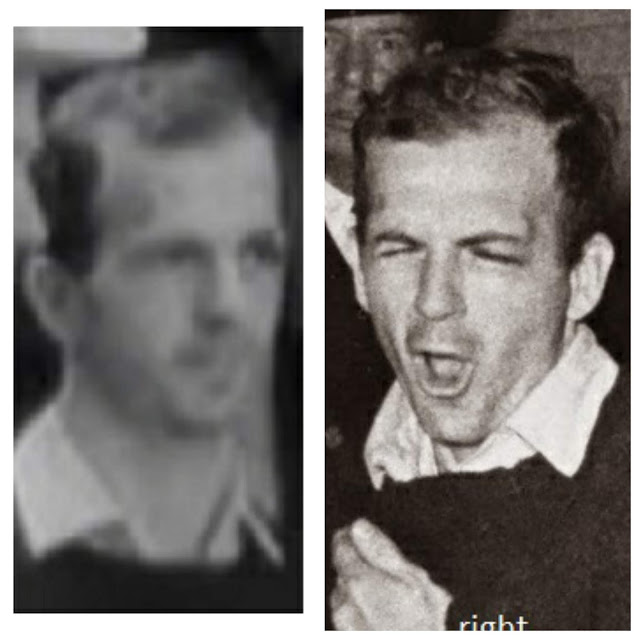 I am satisfied that that is Oswald on the right because his ear looks right (and very different from the one on the left); his hair looks right, as do his eyes and nose.  Let's look at Beers. 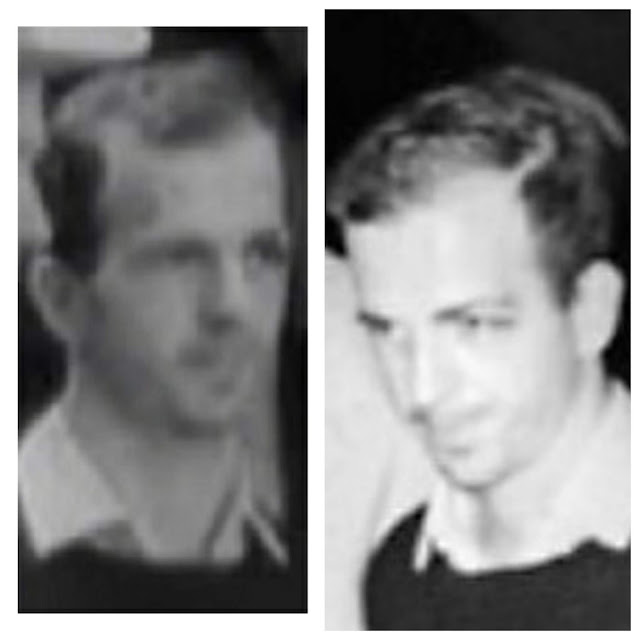 I have always wondered about that weird, impossible flip of hair in back on Oswald in Beers. I have no explanation for it. But, I am satisfied that is Oswald on the right because the ear is perfect; the eyes looks good, and the hair seems right otherwise. Now, we have to compare to Oswald in the films. 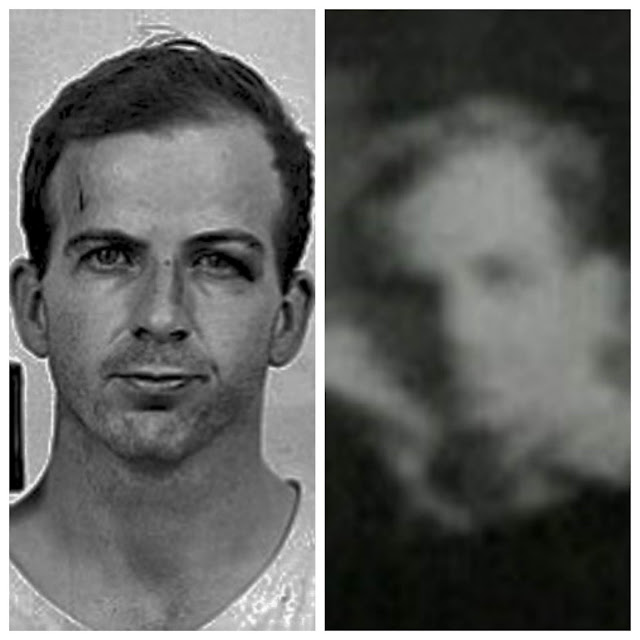 Here is another film shot, and I'm not sure which one it is: 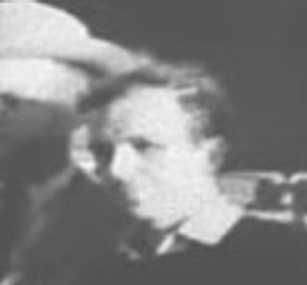 That ear is too small; the hair isn't right; it looks artificial in front; and the nose is too short and too uplifted. 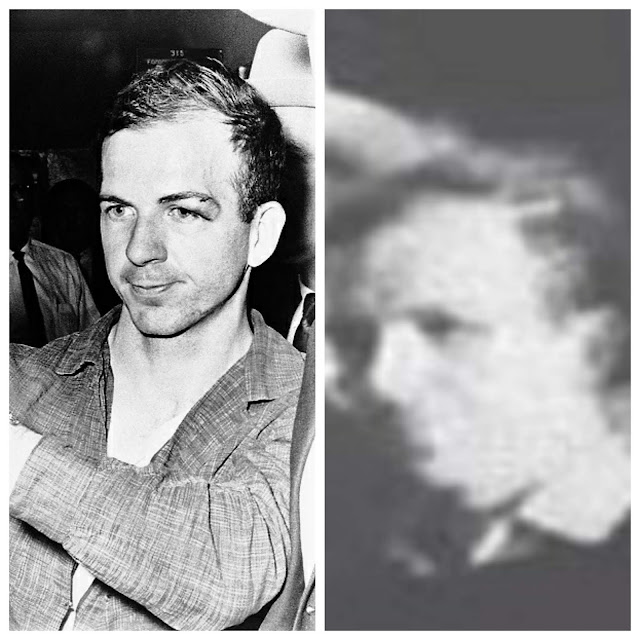 So, that isn't Oswald on the right. And here's where it leaves us:

We're left realizing that it wasn't Oswald in the garage during the filming of the spectacle. However, it was Oswald in the garage beforehand for the picture-taking. Apparently, the famous photos (Beers, Johnston, and Jackson) were all taken beforehand with the real Oswald. Recall what Dr. Fred Bieberdorf said, that he and everyone else was kicked out of the garage at 9:45.  That was to nab Ruby, and apparently, to take pictures using the real Oswald. Then, for the spectacle, they used that little-eared guy for Oswald and James Bookhout for Ruby. Where was Oswald at that time? Being done away with, I suspect.

We don't see Oswald again until he was rolled out on the stretcher. Was that him? We'll look at that next time.