There is a widely circulated article on the internet by Jane Grey called: JFK Jr. told the world who murdered his father, but nobody was paying attention. You can read it here: So, the idea is that when JFK Jr. called his magazine "George" it was a veiled threat to George HW Bush, that he was going to expose him for killing his father.

Is that true? I don't claim to know, but I should think he would have avoided tipping him off.

The article is devoted to examining the evidence that Bush was there in Dealey Plaza on November 22, 1963, starting with the 1963 memo of J. Edgar Hoover, discovered in 1978, in which Hoover referred to a George Bush of the CIA.  Bush responded that that was another George Bush, but a George William Bush was found, and he denied that it was him. Besides, the memo concerned the anti-Castro Cubans, and it's known that George HW Bush was involved with them. Do you recall the Bay of Pigs boats? The Houston, the Barbara, and the Zapata?

But, then it gets really interesting because Jane addresses the claim of Roger Craig that he saw R.E.Vaughn arrest an "independent oil operator from Houston" who came rushing out of the Dal-Tex building shortly after the shots. Jane asks the necessary question: Why did Vaughn arrest this man? And, she provides a plausible answer: BUSH MUST HAVE LOOKED GUILTY.  He must have been sweating, panting, and looking stressed and looking like he was hiding something.

Then, Jane looks at the FBI memo concerning a call from George Bush to the FBI on November 22, 1963, from Tyler, Texas, about an hour and a half after the assassination, to point the finger at someone- and totally without substance or credibility. She argues that this was panic-driven, that Bush needed to establish his location as Tyler, not Dallas, at the time of the assassination, because of his brief arrest immediately after the assassination.  So, it was all about creating an alibi for himself. Bush biographer Russ Baker says the same thing.

Note that if Bush didn't drive to Tyler to make that call, he could have gone by small plane or helicopter, or he could have had someone else make the call- an audio double.

Then, she said that Bush never was any good at hiding his feelings:

"But this story shows clearly that Bush was not the sort of cold-blooded killer who could take part in the murder of a man, and then act and look like nothing was going on as he tried to leave the scene of the crime. And it turns out that as an old man, Bush continues to suffer from this character trait, of being unable to hide feelings that need to be kept secret."

Then, Jane cited Bush's behavior at Gerald Ford's funeral when he made an inappropriate smile when referring to the "demented gunman" who shot President Kennedy.

Roger Craig told Jim Garrison about Vaughn arresting the oil operator, and Jane claims that Garrison, no doubt, spoke to Vaughn about it. But, is that true? I would have to see evidence of that before I could accept it.

This is how Jim Garrison wrote-up the incident in On The Trail Of The Assassins:

“At least one man arrested immediately after the shooting had come running out of the Dal-Tex Building and offered no explanation for his presence there. Local authorities hardly could avoid arresting him because of the clamor of the onlookers."
"He was taken to the Sheriff’s office, where he was held for questioning. However, the Sheriff’s office made no record of the questions asked this suspect, if any were asked; nor did it have a record of his name. Later two uniformed police officers escorted him out of the building to the jeers of the waiting crowd."
"They put him in a police car, and he was driven away. Apparently this was his farewell to Dallas, for he simply disappeared forever.”


Now, after hearing that from Roger Craig, didn't Jim Garrison go to Roy Vaughn to confirm it? Why settle for second-hand? So, did Garrison talk to Vaughn or not? And if he didn't, did he at least try to talk to him? And if he tried and couldn't, why couldn't he?

But, here is Jane putting 2 + 2 together: She feels very strongly that it was just like Bush to describe himself as "an independent oil operator from Houston" because he did, in fact, describe himself that way to the FBI that very day. He didn't use those exact words. Instead, he was much more specific, stating that he was the head of Zapata Offshore Drilling in Houston.

But, what I have to wonder is: didn't Vaughn ask the man his name? It seems that any police officer would. And, it's an easy name to remember. Plus, as I said previously, George Bush was running for Senator at the time. I do not know if he had already announced, or if he was about to announce, but it was one or the other.

And think about it: Very soon afterwards, George Bush was immersed in campaigning: making appearances, being interviewed; being photographed, and being televised. Here he is in 1964 in a tv ad: 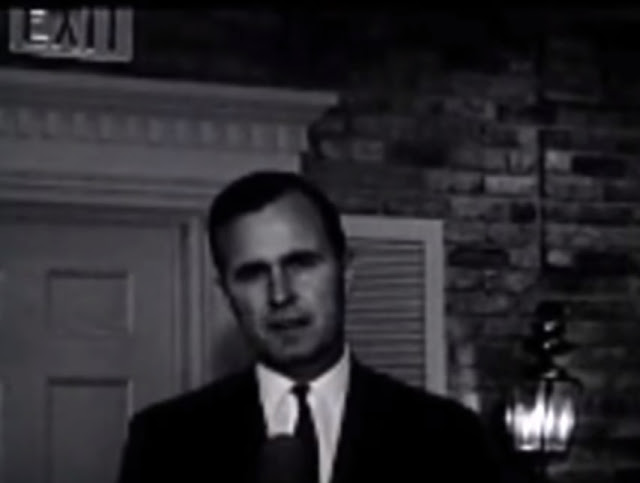 So, even if Vaughn didn't ask Bush his name, didn't he remember what he looked like? And didn't he recognize him when he saw him on tv? And doesn't the same go for Roger Craig, since he witnessed Vaughn arresting him?

So, even if you think Vaughn wouldn't have said anything, what about Roger Craig? Wouldn't Roger Craig have pointed out that the man who was running for the Senate got arrested shortly after the JFK assassination?

Vaughn never spoke of the incident, but Craig did. So, why didn't he identify the man as George Bush?

I agree that it looks bad for Bush because for the longest time he said he couldn't remember where he was when JFK got shot, and that is just not credible. And then, not him, but his wife writes a book in which she claims he was in Tyler giving a political speech which got interrupted by news of the shooting? But, if that was the case, then why didn't he say so all along?

And sure, they got some guy to claim he witnessed it, but hell, I had an FBI agent call me and tell me that James Bookhout was at least 6 feet tall, and that was a bold-faced lie. So, it means nothing.

The bottom line for me is that I don't have any doubt that George Bush was there, and he was involved. His behavior has the stench of guilt. Do you know that he skipped Richard Nixon's inauguration in order to see LBJ off at the airport? They weren't even of the same party. How could they have bonded so close? How about the bond of blood, spilled blood?

Is it possible that that was Bush, but there was a disguise involved? Even if he just wore a fedora hat, it would have disguised him a lot. Look how well it worked for James Bookhout.