This is a receipt I got at Walmart yesterday. Now, they have an inspector standing at the door who inspects your goods and looks at your receipt and makes sure you paid for everything. Has shoplifting been on the rise? Of course, they do that at Costco as well, but they always have. 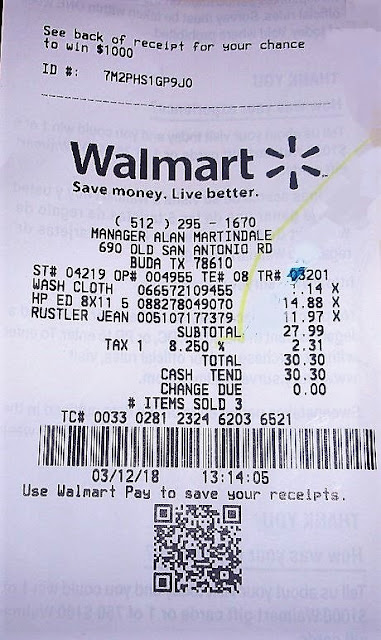 The guy who inspected my products and drew the yellow line happened to be an 85 year old man. That's my honest opinion of his age, and I'm pretty good at estimating ages. Nice guy. Very friendly. So, I asked him if he thought anyone could get by him without being seen, and his response was, "Not a chance."

And I believe him. The span of that exit hallway is probably 3X the width of the Main Street ramp. But, I'm sure he can do it.

Yet, we are supposed to believe that a 29 year old policeman, Roy Vaughan, who was guarding an 8 foot wide ramp, couldn't keep Jack Ruby out; that he just didn't see him. But wait: it's much worse than that. At the time that Ruby supposedly snuck in, it wasn't just Vaughan there. There was Lt. Sam "Rio" Pierce plus two other officers, Putnam and Maxie, who were riding in his car. So, there were 4 police officers there at the time, and all on high-alert, and yet none of them saw Jack Ruby as he walked on in.

And note that Ruby did say that he got in that way- through the Main Street ramp. And considering that he took responsibility for shooting Oswald, which is to say that he believed that he did it because Dallas Police told him that he did, why would he lie about how he got in? He wouldn't. He couldn't. He didn't.

However, some have tried to resolve this by claiming that Ruby did lie, that he got in a different way, that somebody opened a door for him somewhere else. But, just think about it a minute. If that were true, it would mean that the Dallas Police conspired WITH Ruby to kill Oswald. But, think about the nature of conspiracies. People conspire together because they all expect to win. They all expect to come out winners. How could there be a conspiracy where some conspirators jump on another conspirator, then drag him off, accuse him of murder, strip him down to his underwear, have a doctor do a rectal exam on him (to search for guns in his rectum, which they did not do to Oswald) and then charge him, prosecute him, testify against him, and aid in every way the prosecutor who got for him the death penalty. How could they be conspiring together? The whole idea that Ruby conspired WITH the Dallas Police to kill Oswald is just plain stupid; incredibly stupid.

So, that makes no sense, and 4 cops being in an 8 foot wide ramp and not seeing Ruby enter and go down the ramp also makes no sense.  The only thing left is that Ruby did exactly what he said he did- enter thru the Main Street ramp- but he did it EARLIER. He got there earlier. And when he got there, Pierce was alone in his squad car, and the cop on foot was not Roy Vaughan, whom Ruby knew. Ruby claimed not to recognize the cop on foot, and he surely would have recognized Vaughan. He knew Roy Vaughan. Among other things, Vaughan had forgiven a driving infraction that Ruby had made- he cut him some slack and didn't ticket him because Ruby was a friend of the department. So, how is Ruby not going to remember him?

Roy Vaughan was as solid as the day is long. He went on to become the Chief of Police in a neighboring city, and then after that, he went on to become a Municipal Judge. And he swore, to his dying day, that Ruby did not get past him at that ramp. He believed that Ruby must have entered another way. But, the truth is that Ruby entered that way- BUT BEFORE VAUGHAN GOT THERE. That's the answer. There is no other way Ruby could have gotten in- WITHOUT HELP. And if he got help, then the Dallas Police were colluding with him, and that is impossible. So, there really is no alternative: Ruby entered thru the Main Street ramp but at an earlier time- before Roy Vaughan got there.

Roy Vaughan received an official reprimand from the Dallas Police Department for letting Ruby in-  thru his negligence.  Why didn't they reprimand Pierce, Putnam, and Maxie as well? They had eyes, didn't they? They were on high-alert, weren't they? There's no logical explanation.