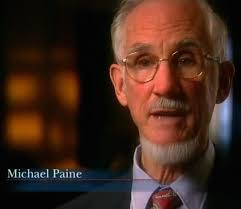 You probably heard that Michael Paine died recently. This comes from a commentary about his life:

In a 2013 essay he titled, “My Experience with Lee Harvey Oswald,” Michael Paine recalled that Oswald once declared emphatically that “change only comes through violence.”


“I’d also heard him say that President Kennedy was the best president he had in his lifetime. Looking back on what happened, these two statements seem impossibly contradictory … how could a man want to kill a president whom he thought was the best president he’d had in his lifetime?”
So, what do I make of that? Michael Paine pointing out Oswald's supposed contradiction? I say that nothing Michael Paine said in 2013 matters at all. Nothing he said then has any validity nor any value nor any credibility.

The way the mind works is that if you were involved in a terrible thing, as Michael Paine was, that the mind rationalizes it. It does so by acquiring, over time, a schtik, a set of talking points, comprised of, not just lies, but half-truths. And because the event in question happened decades ago and the person in question is long dead, the mind is free to "remember" things however it wants, in whatever way serves its own comfort and well being. And that's why to take seriously anything Michael Paine said in 2013 is incredibly stupid. Michael Paine is a man who, in 1964, said that in seeing and handling a rifle wrapped in a blanket, he thought it was "tent poles"or perhaps a "shovel" part of the Oswald's extensive camping equipment. Big campers those Oswalds were. Didn't you know?

So, if Michael Paine was capable of saying that in 1964, just months after the JFK and Oswald assassinations, what reason is there to put stock in anything he said in 2013?

So, we are supposed to believe that Michael Paine was separated from his wife Ruth, with whom he had two children, where he was their sole support, and when she wanted to move a pregnant woman and her daughter into the house, at his expense, his response was, "Sure, Honey. The more the merrier. What's money for?"

And, it so happened that Paine worked at Bell Helicopter, under Walter Dornberger, the ex-Nazi who Dulles got out of Germany via Operation Paperclip. And after Kennedy was killed, Bell Helicopter got a government contract for $600 million to build Huey helicopters.  And, that's $600 million in 1960s money. How many billions of dollars does that equal today?

So, Michael Paine died, and his secrets died with him- he took them to the grave.  But, the stink is still on you, Michael, and it always will be.