It is amazing the degree of delusion and delirium that exists in the JFK world. Case in point: Mark Pommier on McAdams' forum, and below he is talking about the disputed figure outside the TSBD. He was addressing Dave Reitze, who is apparently a rather prominent apologist for the official story. Mark wrote this before I posted the image of Gus Rose but apparently not before he saw it elsewhere. 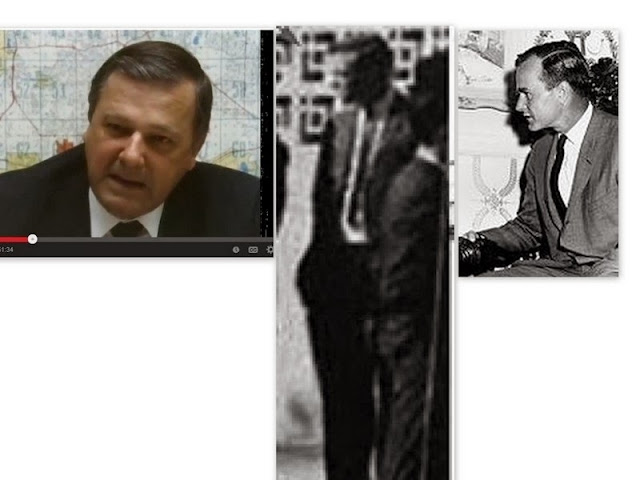 "Hey Dave! THANK YOU! The Mark Pommier to which Vince refers is me. When
you say that my theory seems possible, that's like gold for me!"

(Cinque: Since Dave Reitz is a lone-nutter, and you are a CT, why do you care what he thinks? Besides, he just said your theory "seems possible" which is not a ringing endorsement.)

"I would have provided a side-by-side comparison, but I simply did not have time."

"I've been saying EVERY time I come across the claims that it's Poppy Bush
that it's indeed DPD Detective Gus Rose. It looks like Rose, and all
circumstances support my hypothesis"

(Cinque- Oh really? You do say.)
"If I have to post a side-by-side comparison for persons here that claim to
be conspiracy or LN sleuths, why should I stop there? Maybe I should just
do all of their research too, and then let them take the credit."

(Cinque- Well, how about the idea that he who proffers the theory should be the one to back it up? Just a thought.)
"Vince Palamara believes it's Rose, and I'm quite certain of it. Vince
wrote to me that Gary Mack is splitting hairs by claiming that Rose was
off-duty, and came straight to the DPD when he heard about the murder of
JFK. No disrespect intended for Gary Mack, but he said that Rose showed up
at DPD between 1:30 and 2P, and the 3 Tramps image wasn't acquired
photographically until 2:15."
"Now, is it unreasonable to accept that perhaps a 15-minute window of
discrepancy might be the obstacle to acceptance of what to me, is a
picture of Rose in front of the TSBD? It seems peculiar to me that Rose
would go to the DPD directly, when the reports on television/radio that
Rose may have heard would have caused him to go directly to the scene of
the crime."

(Cinque- So not only does the guy not look Rose, having a pit-bull shaped face rather than like a giraffe as we see on Bush and the disputed figure, but it's doubtful Rose was even in Dealey Plaza at all, with no official record of him being there.)
"I could gain a remote semblance of understanding of Mack's apparent veto
of my identification of Rose, if the DPD was across town from the crime
scene. But it's just around the corner. Also, Rose's detective status
likely mandated his wearing a suit on the job."

(Cinque- Where's his white stetson hat? And why is he milling around with the feds?) 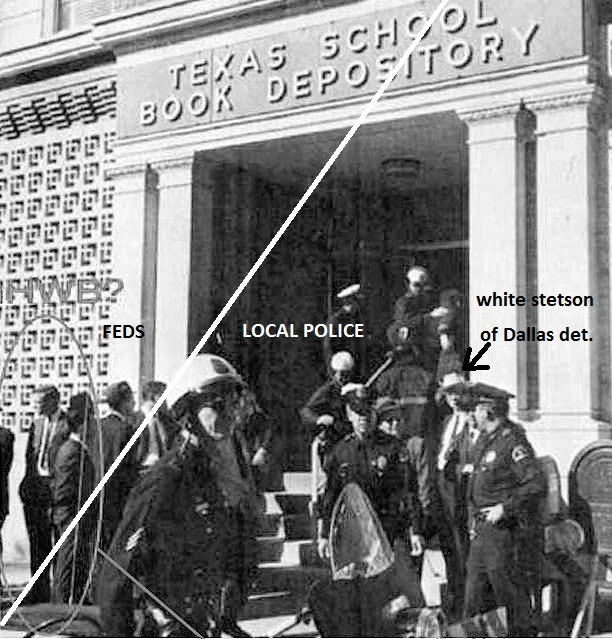 "He would have been on location, doing that job. The only image I could find of Gus Rose was from
Turner's TMWKK from '88. The years have been kind, but likely added a few
pounds."

(Cinque: it's not just that. Take a few pounds off, and he still has a very different shaped face.) 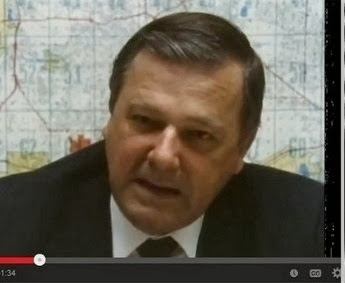 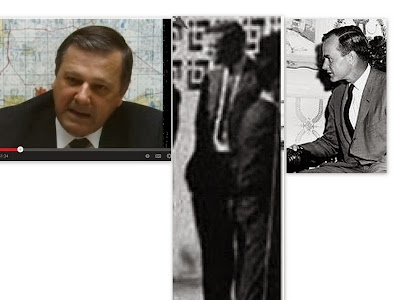 (Cinque: it's mighty folksy of you, Mark, but think: doubt; it's sometimes good for you.)

"This situation exemplifies the cut-throat nature of the research world concerning JFK's murder. If
Researcher A didn't discover it, it must be wrong! I could perhaps gain a tiny portion of credit in debunking a pet theory, and these "researchers" deny its possibility without inasmuch as considering it. Those wishing to
cling the false notion that it's Poppy Bush will continue to deceive themselves and others."

(Cinque: Mark, speaking of deception, that is definitely not Rose in the picture, and it's a spot-on match to Bush.)
"Frankly, the first time I ever saw that picture of Rose I knew it was him and not Poppy Bush."

(Cinque: Based on what, Mark?)

(Cinque: No, Mark, it's not about their guts; they have to use their eyes and their minds.)

"Sometimes you have to suck up the truth that you're wrong sometimes. I've had to do
that a few times in this group. It's never fun, but it's necessary."

(Cinque: You need to do it again, Mark.)

Mark wrote the above before seeing the image of Rose that I posted. His response:

(Cinque: So, I guess all bodies are the same then.)


"Having agreed with you that far, now if you would please refer
us to the body of knowledge where you get the idea that every photograph
will exhibit physical signs of shoulder droop as it pertains to their
strong hand? If it's a percentage, then how do you know on which side of
that percentage this particular image falls?"

(Cinque, No, Mark, the shoulder tends to be higher on the side of the dominant hand." 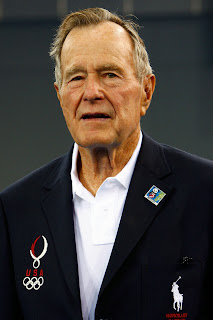 "The fierce manner in which you're defending that it's a picture of Poppy
Bush is frankly more indefensible than my proposal that it's Rose."

(Cinque: Not true, but thanks for using "indefensible" in reference to your proposal.)

"Did you look at the clear cropping done by Unger at the Ed Forum?"

(Cinque: Yes, it is. And it's Oswald in the doorway too.)

"You cannot accept that I'm right, when it causes you to be wrong."

"I don't gloat over that, but the intransigence to inasmuch as allow for the
possibility does not reflect well on your ability to objectively study
this murder."

(Cinque: nor on your ability to form a coherent thought)


"Sorry to disappoint you,but it's Rose in the picture. I am
right."

(Cinque: that is, wrong)
"Now I'm back to the drawing board to hopefully gain some traction for my
non-converging eyes theory! I sure hope you don't think it's Poppy Bush's
cadaver in the autopsy images."

(Cinque, what's amazing about you people is that you think the top two don't match, but the bottom two do) 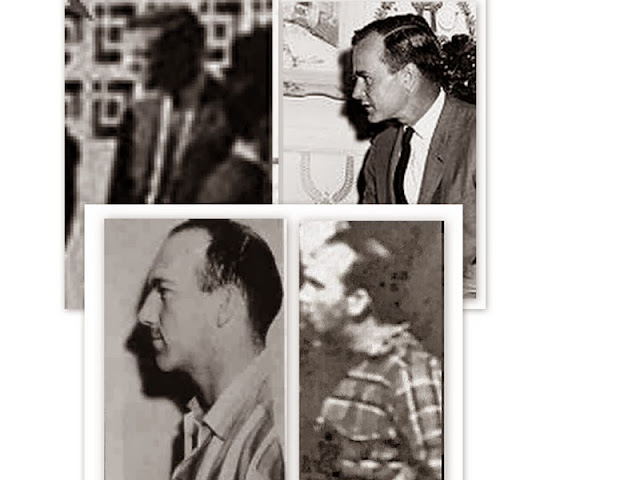 "Congratulations! The image you found is the one I took from my own TV
screen last week, to demonstrate to Vince Palamara that it's Rose in front
of the TSBD."

"Vince agrees, and so does Dave Reitzes. Those two researchers
have some pretty impeccable information, even if their mindsets differ
between CT and LN or in-between."

(Cinque: Then let's let them speak for themselves, OK? If they continue to maintain it's Rose after seeing the image I posted, I'll be sure to report it, don't worry.)


"I'm curious as to what Dr. McAdams opinion is that it's Rose, as well as
Bigdog, John Canal, Jean Davison, Tony Marsh, and all of the other great
minds here. If a theory can gain traction here, it indeed has traction.
Without support from the people in this group, any theory is thus
diminished. Thanks, folks!"

(Cinque: I'll report what the other "great minds" have to say as well. Sounds like you've got a real mutual admiration society going there. And the amazing thing is you don't even agree about who killed Kennedy.)