Moving on to cover bpete's nonsense. Now he thinks that if he repeats a false idea enough times it will grow wings. bpete: saying it was Oswald in the doorway was FORBIDDEN. And even if somebody did say it in defiance of the ban, it would not have been reported, certainly not by the Warren Commission, and not by the newspapers either. The fact is that we don't know what anybody thought or said about it, so the absence of such testimony means nothing.

Oswald told Fritz he was out with Bill Shelley in front. You may be too stupid to realize the importance of that, but stupidity doesn't make it go away.

And then the idiot bpete, hypocrite to the end, laments the fact that the FBI letter in which they stated that Lovelady stated that he had worn a red and white striped shirt and blue jeans wasn't signed by Lovelady. But a passing reference in a memo in which someone said that a talk with Lovelady settled the whole matter- was that signed by Lovelady???????????? That's right, just keep tripping all over yourself.

Then bpete said the FBI admitted to the mistake of falsely reporting what Lovelady said. Where and when did they do that, bpete?  Wasn't it just the HSCA that gingerly danced around it 16 years later in 1979?

As for the shirts, Oswald didn't have a choice: his buttons were missing. Did you read what Dr. Wrone said in my previous post? HIS BUTTONS WERE MISSING. But, on what basis do you claim that Lovelady's shirt was so unbuttoned?  Especially when we have this:

Lovelady wasn't unbuttoned,. You can see both his collars. His top button was unbuttoned, and that's it. Otherwise, he was buttoned up.

Then, bpete tries to find contradiction in a statement that Jim Fetzer contributed in reference to the fact that at the FBI photo shoot his shirt wound up unbuttoned.

Now, we don't think that was his idea. And I think that it's possible he or someone gave that shirt a nudge where the arrow is pointing, just to get it to spread open more than it was doing. But, why would you arrange someone like Doorman unless he was wearing the same clothes? This is visual evidence that at the time, they must have thought those were the clothes he wore, which goes along with their written statement about it.

So, you've got two things: a categorical statement that he stated he was wearing a red and white vertical striped shirt and blue jeans, and a photograph in which they posed him like Doorman. Together, they comprise STRONG evidence that they thought that was his 11/22/63 wardrobe. And the only way they could have gotten such a thought is if he told them.

And there's actually a third confirmation:

We believe that was the real Lovelady from the Couch film. Notice that the shirt looks faintly striped.

And we could add this short-sleeved shirt: 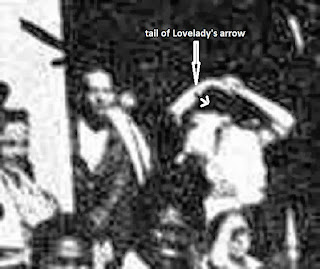 Notice that Black Hole Man's shirt was short-sleeved too, and Lovelady drew that arrow to indicate himself. The head in white wasn't visible because it was drawn black on black. Why would someone have a person draw an arrow black on black? Answer: so that it couldn't be seen. Fortunately, the tail end wound up in the flesh color of Black Hole Man's forearm.

And you know that Lovelady must have worn a short-sleeved striped shirt because why else would they go to so much trouble to make a phony movie of him at the Dallas PD using phony Loveladys?

They couldn't make up their mind what look they wanted to give him. But, every one of them were fake. Lovelady was never in that room. But, this relates directly to the short-sleeved shirt because it's only because of the fiasco about the shirt (which those two FBI agents must have caught Hell for) that they had to go into the movie business. And the same is true of Gorilla Lovelady from the so-called Martin film. 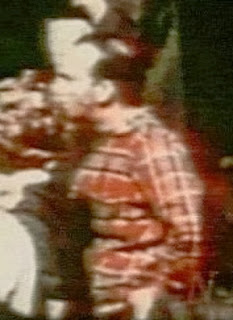 That was not Lovelady. This, on the left below, was Lovelady: 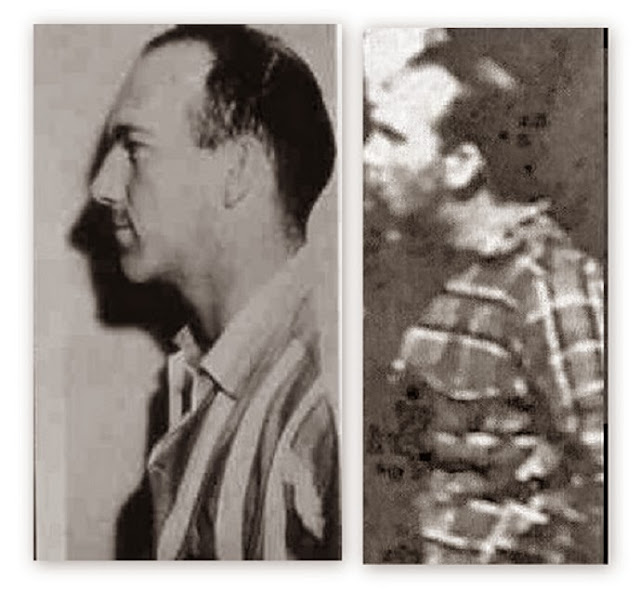 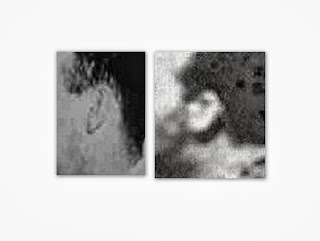 Can you see it now, bpete?