Jones Harris went to the TSBD to interview Lovelady. They wouldn't let him inside. They sent Lovelady out to talk to him. They walked across to the reflecting pool and sat down and talked.

Here is what I think happened:

Lovelady did his Warren Commission testimony in April, and then, he didn't lie. He never said he was Doorman, and he drew an arrow to another figure in the photo, Black Hole Man, to indicate himself. 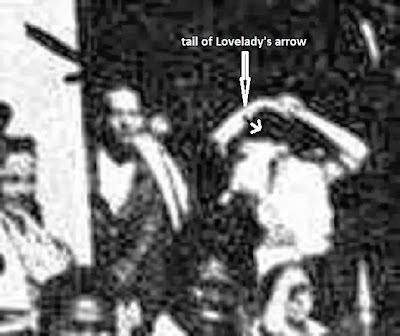 Not bpete, not Joseph Backes, not David Von Pein, and not anybody has offered any other arrow for Lovelady. You're welcome to look for it yourself. I believe I found it, and you don't see the head of the arrow because it was drawn black on black, as Ball instructed Lovelady to do. Fortunately, the tail overlapped the flesh-colored forearm.

But, that must have freaked Joseph Ball out. He scrambled after that.

Mr. BALL - Draw an arrow down to that; do it in the dark.

Mr. BALL You got an arrow in the dark and one in the white pointing toward you.

(Note that he did not say that anything about them pointing to the same figure, the man by the white column)

Mr. BALL. Where were you when the picture was taken?

(Why ask that? If both arrows were pointed to Doorman, then he knew exactly where he was. Ball was just stalling, looking for a way out.)

Mr. LOVELADY - Right there at the entrance of the building standing on the the step, would be here (indicating).

Mr. BALL - You were standing on which step?

Mr. LOVELADY - It would be your top level.

Mr. BALL - The top step you were standing there?

(How many times does he have to ask him? Ball must have been sweating bullets.)

Mr. BALL - Now, when Gloria came up you were standing near Mr. Shelley?

(What's the point of that question? Lovelady already established where he was standing, and Shelley can't be seen in the photo, so he can't be too near him. And what difference does it make? Ball is just scrambling, winging it, finessing his way around the bombshell.)

So, that was April 1964. What do you think happened after that. Ball must have talked to somebody to the effect:

"That fucking Lovelady tried to claim to be someone else in the picture. It's a good thing I only asked him to draw an arrow. We almost lost this thing today. Didn't your people talk to him? Didn't he know what's expected of him? Now, you get some people to him fast to tell him that this is no game, and if he values his life, he better get with the program."

May 1964, when he talked to Jones Harris, was the first time Billy Lovelady claimed to be Doorman. Prior to that, it was just other people saying it.

But, the point is that even then, he admitted wearing the short-sleeved shirt. And as for him saying that he wore both shirts, I think it was just a desperate attempt to reconcile the truth with the lie.