Lance Op-percut responded. First, he's not going to meet me in Dallas to put a camera to his theory. No
surprise there.

I'm going to ignore the bravado. Hey Lance! Save it until the day we meet in person.

So the first thing he said is that the upper left quadrant showed a perfect match to Lovelady's collar. 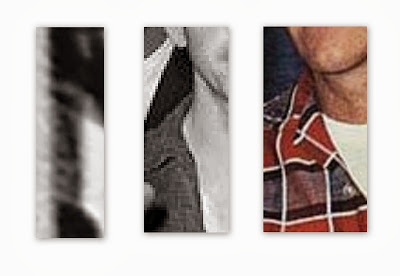 I don't think so, Lance.

Then he says the "visible area" of the shirt isn't big enough to show boxes.

That is ridiculous. We should see the boxes everywhere, and in the smaller areas we should see parts of the boxes, corners of the boxes, etc. Plus, the visible area of the shirt is at least half the whole shirt. So, don't tell me it isn't big enough to show boxes.

Then, he tries to claim that he found a single white vertical line. He drew one in, but I am not going to show you that. With me, you just have to look at the raw image and see if you can see any vertical lines. He doesn't get to help your eyes with suggestion.'

There are no vertical lines on that shirt. And there are no horizontal lines either of the delicate kind that we see on Lovelady's shirt.

Lance, I told you: you can't draw any lines in. You can point to an area which you think contains a line, and say "look there,"  but you can't draw it in.

There is nothing remotely plaid about Doorman's shirt and in no way does it match the shirt that is claimed for Lovelady. 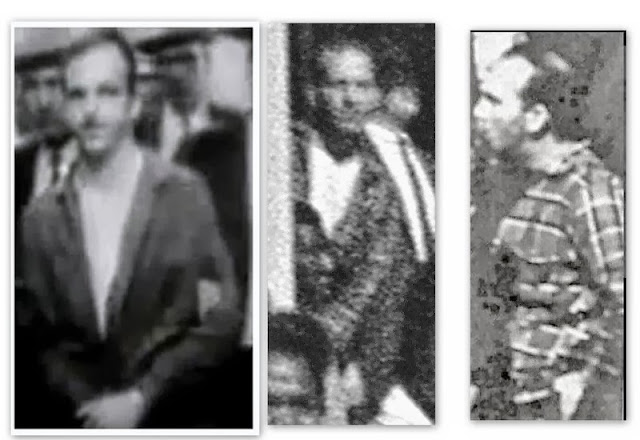 To claim that what we see on the right came out as what we see in the middle is PREPOSTEROUS.

And get this: the slimey SOB refuses to confirm it with a camera!

Well, guess what, you slimey mudder-rucker: I'm going back to Dallas without you, and this time I'll get a plaid shirt exactly like Lovelady's. You see one of us is not afraid to put his theories to the test. You are going to rue the day you brought this subject up again. I only live 3 hours from Dallas.

But, in the meantime, don't you draw in any more lines that you are claiming. You can point to anything. You can't describe it. You can make comparisons. BUT, DO NOT DEFILE THE AREA THAT IS BEING EXAMINED. That is dastardly. That is despicable. That is not allowed.