Why DoorMan had to be Oswald:
A concise statement

I have been asked at times to provide a concise compilation of the talking points as to why the evidence is clear that Lee Harvey Oswald was the Man in the Doorway of the Altgens photo.

There are multiple strands of evidence that support this and nothing but holes in the contrary argument that he was not Doorman. And all together, it rises to the level of certainty that that was him.

It starts with the photographic evidence: comparing images of Oswald to the Doorway Man, and there are two things you need to realize about that in advance. The first is that there is only one other person under consideration, Billy Lovelady. So, it comes down to who makes the better match. Not the perfect match, but the better one. It is quite true that the doorway image is very poor quality. The resolution stinks. Furthermore, the authenticity of the photo is in doubt. Dr. David Drone, in his 2005 book, pointed out that the Altgens photo appears to have been “crudely altered” and I certainly believe that it was. We have a photographic expert, Roy Schaeffer, who has 35 years of experience processing photos for newspapers, who says it definitely was. Still, we can only work with what we have.

However, the second thing is that we are dealing with two separate and distinct issues: the man and the clothing. There was Lee Harvey Oswald and the clothes that he wore, and there was Billy Lovelady and the clothes that he wore. So, whose clothes is the Doorman wearing? When you have a match to Oswald the man, in terms of the physical features, and you also have a match to Oswald’s clothing on Doorman, that constitutes, not just an overlapping confirmation, but a geometric one. By that I mean that the rise in certainty rises geometrically from confirming the clothing. And we can confirm the clothing: the loose-fitting, unbuttoned, and sprawled open long-sleeved shirt over the exposed white t-shirt with the vee-like opening. 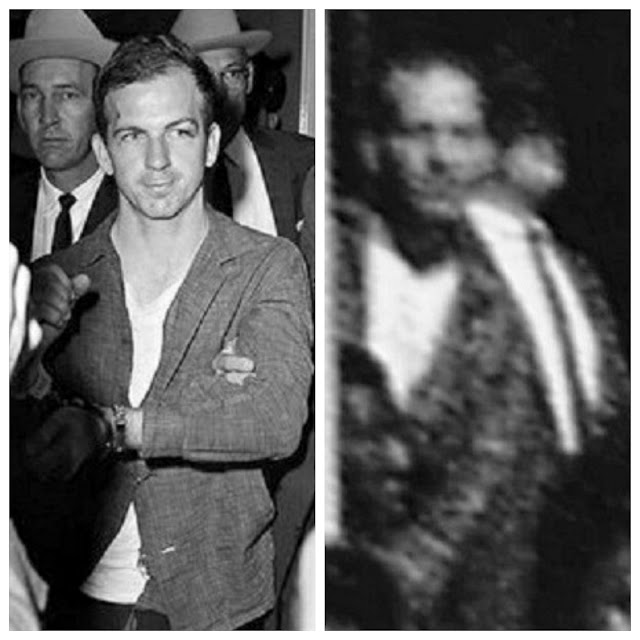 If you compare the images in the collage above, you see a perfect correlation of all the features of the man and the clothing, with one exception, and that is his hairline and the shape of the top of his head. From the eyes down, those two are identical in physical features and clothing, and it is preposterous to think that Lee Harvey Oswald and Billy Lovelady were identical in physical features and clothing from the eyes down. The best and only explanation for the discrepancy is that the photo was altered in the hours after the assassination to change the top of his head. And it’s not a wild idea. It’s widely accepted that the Backyard photos were altered, where the face of Oswald was put into the photo over the body of another man. Oswald, himself, said that was the case. And if you defend Oswald’s innocence, you have to accept it because in the photos, he is posing with the murder weapon, which he said he did not order or own and had never saw or held. So, those photos have to be fake if you maintain that Oswald was innocent. So, if they were altering photos of him even BEFORE the assassination, they were certainly prepared to alter photos of him afterwards.

The challenge to that argument is that there was no time to alter it, that it got out too fast, etc. but the evidence does NOT support that. The fact is that the first public showing of the Altgens photo was Walter Cronkite showing it at 6:30 PM Eastern time on tv, which was 5:30 PM Central time, hence 5 hours after the assassination. 5 hours left plenty of time to alter it. And think about it: if CBS had the photo at 1:00, as some claim, why wouldn’t thy show it earlier than 5:30 Central? Why would they wait? Why would they sit on it? It was a competitive situation. They could have shown it earlier and then shown it again at 6:30 Eastern without losing a thing or hurting anything. The fact that they didn’t show it earlier is because they didn’t have it earlier precisely because It was being altered.
Here is the comparison again, this time with the disputed tops of the head taken out of view. Now we have a perfect match. And if you look at it closely, you’ll see that it’s perfect down to small details: the eyes, the nose, the mouth, the neck, the build, the size, and also the v-like depression of the collar of the t-shirt.

The idea that there was that much likeness (a perfect match from the eyes down) between Oswald and Lovelady is preposterous. It’s not that there is not much chance of that much likeness between them; it’s that there is no chance. They weren’t related. They didn’t particularly look alike. And physically, they were vastly different. Billy Lovelady was 5’8”, 170 pounds according to the FBI who weighed him, while Oswald was 5’9” and weighed only 131 pounds at the time of the assassination. So, to say that they looked alike would be like saying that Laurel and Hardy looked alike.

I could go on showing images of Oswald and comparing them to Doorman, but I want this to be a concise statement. So, let’s move on to Billy Lovelady. First, note that there is a maelstrom about how he looked and how he was dressed on 11/22/63. The multiple claimed images of him conflict with each other. And some of these images occur at times and places where he denied being. For instance, the most widely used image of Billy Lovelady is this one that was supposedly taken 10 to 15 minutes after the assassination out in front of the TSBD. But, Lovelady claimed to leave the front of the TSBD immediately, saying that he and Bill Shelley joined the throng of people who descended on the railway area looking for the shooter. Billy Lovelady NEVER identified this as an image of himself. 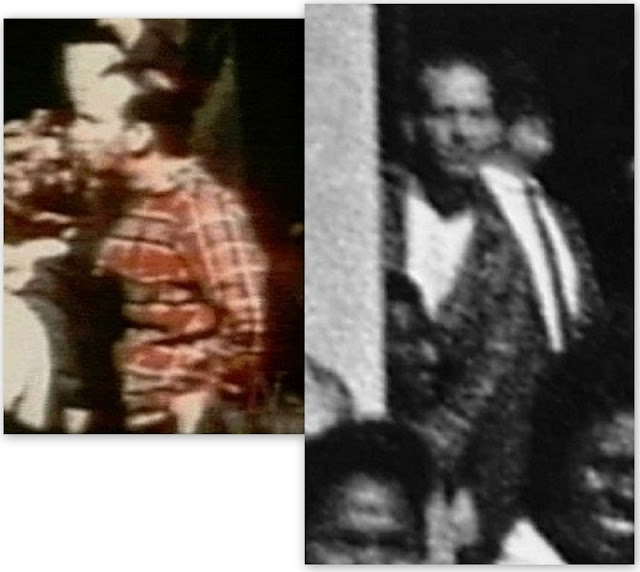 Yet, that is the mostly commonly cited image of Billy Lovelady on 11/22/63. Look how poor the match is to Doorman in both the man and the clothing. The guy on the left doesn’t even have his shirt sprawled open like Doorman. He definitely isn’t Doorman, and he’s not Billy Lovelady either.


The FBI took images of Lovelady on February 29, 1964 to support the claim that he was Doorman, but those images are highly suspect too. This is J. Edgar Hoover’s FBI we are talking about, who was a very corrupt and demonic man, a completely lawless man, who saw himself being above the law. So, no FBI image can be counted on. It turns out that there is only one image of Billy Lovelady that we can count on, and that is an unauthorized one that was commissioned by Mark Lane. 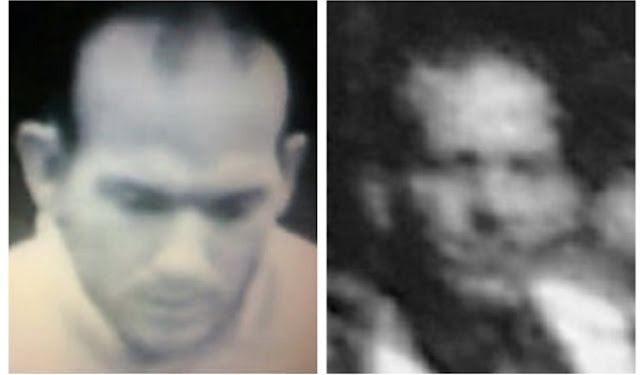 That’s it. We have no other image of him that we can trust. And when we compare these images, we can see that Billy Lovelady had protruding ears, also called in Medicine prominent ears. His ears stuck out. The cruel description of them is Dumbo ears. About 3% of the population have prominent ears, and today, they understand the specific developmental defect that causes them. And today, of course, they commonly do surgery to correct severe cases of prominent ears, and they even have non-surgical treatments. But, what is obvious above is that Billy Lovelady had prominent ears which stuck out quite a lot, and Doorman did not. Doorman’s ears are, in fact, a spot-on match to Oswald’s.

We also found an image of Lovelady doing what he said he did- walking to the railway yard with Shelley. It’s from the Couch film. 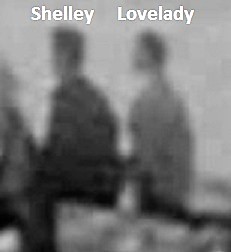 And as you can see, Lovelady, on the right, was wearing a short-sleeved shirt on 11/22/63, just as he told FBI agents on 2/29/64. That is bare skin below his shirt sleeve, going down to his elbow and forearm. So, he could not possibly be Doorman. 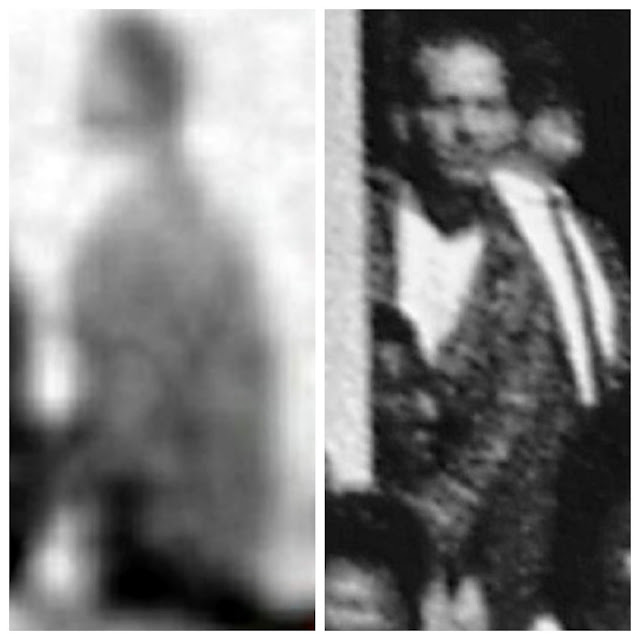 That’s Billy Lovelady on the left, and neither the man nor the clothes match Doorman.

But, let’s move on from the photographic evidence and consider the testimonial evidence. There is Oswald himself who told Fritz that he was “out with Bill Shelley in front”. 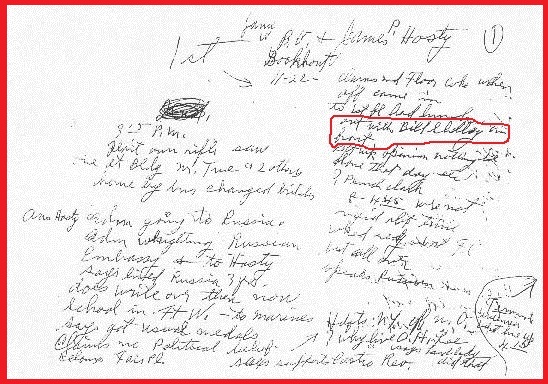 And keep in mind that Oswald could only have been talking about during the motorcade and not later on. Shelley wasn’t out in front later on. Remember: he accompanied Lovelady to the railway yard, and after that, he did not return to the front. They went around to the back and re-entered the building that way. If you would like to read a detailed statement on why the Fritz Notes are authentic and why the reference to being with Bill Shelley out front had to be Oswald’s alibi for the shooting, go to the Wrap page of the OIC website, which is here:

So, Oswald, himself, said that he was out front in the doorway, which is where Bill Shelley was during the motorcade.

Then, there were others who, upon seeing the Altgens photo, recognized Oswald in it. That includes Anthony Botelho, who was Oswald’s Marine buddy. It includes the uncle of a Russian woman who wrote to me, saying that her uncle knew Oswald when he lived in Russia, and as soon as he saw the Altgens photo, he said, “that’s Alek.” Alek was the name that Oswald went by in Russia; he did not go by Lee.

It is true that the Warren Commission produced several witnesses who claimed that Doorman was Lovelady, but they specifically sought such witnesses and were not going to allow anyone claiming otherwise to testify. You need to think of the Warren Commission like a Stalinist show trial.
And remember that the FBI descended on the TSBD like the Gestapo, and word spread very quickly that no one saw Oswald when they shouldn’t have. However, one witness fell through the cracks: 19 year old Carolyn Arnold, a secretary. She said that shortly before the motorcade, she was standing out in front, and she saw Oswald standing at the doorway- behind the glass, not yet having come out, but looking out. This was probably 5 minutes before the Altgens photo was taken. Carolyn Arnold’s first statement to the FBI, given on November 26, 1963, just 4 days after the assassination, is truly a smoking gun, and it is one of the most crucial testimonies, one of the most crucial pieces of evidence, in the whole JFK assassination saga.

There is much more I could tell you about all the subterfuge that followed to hide the fact that Oswald was standing in the doorway during the shooting of President Kennedy, including phony film images of Lovelady, and alterations of other photos and films to hide the fact that it was Oswald in the doorway. It includes the mysterious death of Billy Lovelady, supposedly of a heart attack at age 41, shortly before the HSCA Final Report came out. His is definitely a suspicious JFK-related death,  and I believe strongly in the likelihood that he was killed.

But, keep in mind that the photographic evidence alone makes it certain that Lee Harvey Oswald was the man in the doorway. The match of the man and the clothing exceed the threshold of certainty by a wide margin. It means that Oswald had a rock-solid alibi for the shooting, that he could not possibly have done it. And that means that the official story of the JFK assassination is a grotesque lie, perpetrated by government and media alike for over half a century. It shall not stand. 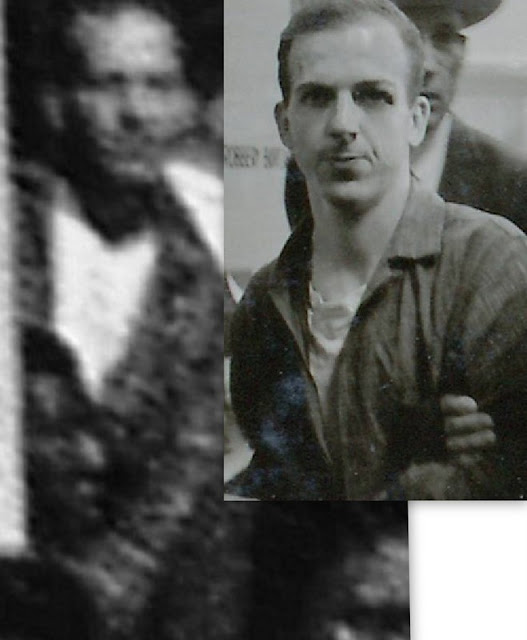