There is a letter to Caroline Kennedy, but it's not from the Dallas Morning News, and it isn't real. It's fiction- a short story. But still, it got some traction.

And it's just like you'd expect, with lots of down-home country charm. Y'all come back, ya here?


How the Morning News Helped Dallas Become the City of Hate

So, it's all about the famous Dealey family (think: Dealey Plaza) and the Dallas Morning News, founded by George Dealey in 1887 and run in the 1960s by his son Ted, who, like JFK was Harvard educated. But, that's where their likeness ended. Dealey was fiercely conservative and staunchly anti-Kennedy.

And now we know from my research last night that Jack Ruby was wrong about which paper he read. It wasn't the Dallas Times Herald; it was the Dallas Morning News. And it did indeed contain that ridiculous article about Jackie and LBJ returning to Dallas to testify against Oswald. But, what could they possibly say about Oswald? What could they say about their experience in Dealey Plaza that established Oswald's guilt? The only thing I can think of is that they saw him in the 6th floor window, but how could either say that? According to LBJ, as soon as the first shot occurred, his SS agent Rufus Youngblood pushed him down into the well of the back seat and got on top of him. Senator Ralph Yarborough never saw that even though he was in the same compartment as LBJ, but if you believe that story, how could LBJ have seen anything? And Jackie was certainly not going to say she saw Oswald, so how could the idea that she was going to have to testify  be considered newsworthy? 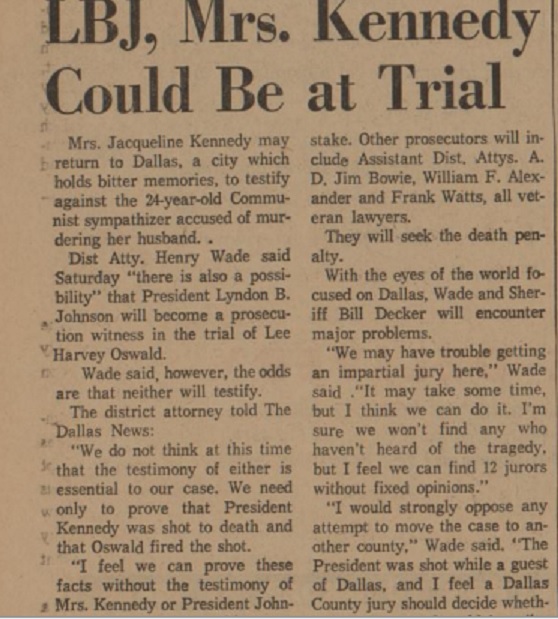 That Jackie Kennedy could be of any use to the prosecution in prosecuting Oswald is ridiculous. It's ridiculous when you consider it now, and it was ridiculous if you considered it then. So, I am wondering if this was written for Jack Ruby, to establish in advance his motive. We know for an absolutely fact that the idea of saying it didn't come from Ruby. It came from his attorney Tonahill.  But, was it all planned out in advance?

Ruby said that in the same edition he read the Letter to Caroline, which is nowhere to be found. So, did they rig something up and print it as the Dallas Morning News just for Jack Ruby? He must have subscribed to the paper, so did they make sure that the one delivered to his apartment had that special page with that special editorial? It wouldn't surprise me if that's true.

You really should read that article about Ted Dealey. You'll realize how much he hated Kennedy. And remember that the Dallas Morning News is the same newspaper that printed that ridiculous but very timely article about Carolyn Arnold changing her story after 5000+days, deciding that she saw Oswald eating in the 2nd floor lunch room at 12:25, which is non-credible for numerous reasons. But, they are the ones who published it, right when the HSCA was focused on Oswald in the doorway.

So, exactly how cunning and shrewd and Machiavellian has the Dallas Morning News been in the JFK coverup? Apparently: very.