Believe it or not, Lee Harvey Oswald was shot by an FBI agent impersonating Jack Ruby (Part 1)

by Ralph Cinque with Jim Fetzer

The very idea that someone other than Jack Ruby shot Lee Harvey Oswald, unsurprisingly, is rather difficult for many people to accept, where their initial response, mentally, tends to be to recoil. "Oh, that's nonsense. We all saw Ruby do it!  He admitted doing it. He never denied it. There are so many images of him." But the fact of the matter has never been properly established.

Bear in mind: the man who shot Lee was the man known as "Jack Ruby" only if they have all of the same features at all of the same times in their lives. That is a principle of the logic of identity: if they differ in any traits in which they cannot have differed and still been the same person, then the conclusion follows that they were not the same person, after all, no matter how many of us may believe that they were.

Of course, there is a general resemblance, especially in relation to the hat he is wearing. But all the images of the shooter are from the side or from the back, and with the low-riding fedora he was wearing, you never get a good look at his face. What little visual information they provide, however, conflicts with this man being the real Jack Ruby. Here's a simple example. In this image of the shooter, he is wearing sunglasses, but Jack Ruby did not wear sunglasses: 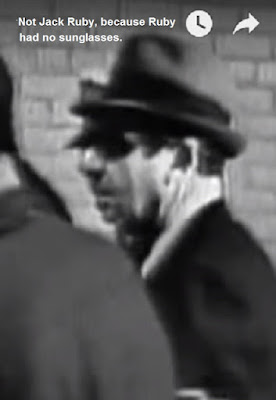 There is a famous photo of the Oswald shooting, the Jackson photo, in which you can see that the Shooter had a pair of glasses in his suit coat pocket, but they aren't sunglasses. They are regular, clear-lensed glasses. 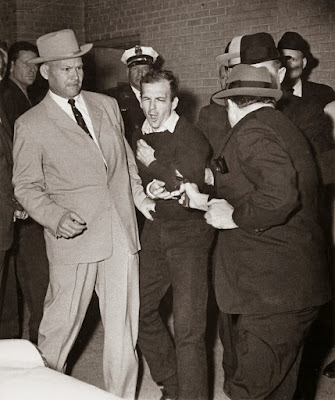 Also, the picture with the sunglasses was taken so soon before the Shooter acted, which would have made it impossible for him to whip them off in the brief interval of time between the photo and the shot. Notice, too, that the shooter is not wearing sunglasses. So what happened to those sunglasses?

If that were the only issue, by itself, that would be substantial. But there are others of even greater importance. Look above at the Jackson photo again. The shooter had a straight horizontal hairline and a clean, razored back of his neck. But Jack Ruby had a scruffy neck--"scruffy" as in having hair growth below his hair line. And he still had that scruffy neck after the shooting! 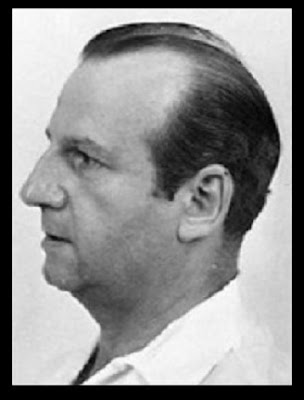 Do you see all that hair on the back of his neck? It goes all the way down to his collar. But the shooter was razor-clean. If the shooter had a razor-clean back of his neck during the shooting, then he should have had a razor-clean back of the neck after. But he didn't. And there was obviously not enough time for his neck to have grown hair in the meanwhile. That means they cannot be one and the same person. Here are both of them. While you're at it, compare their ears. 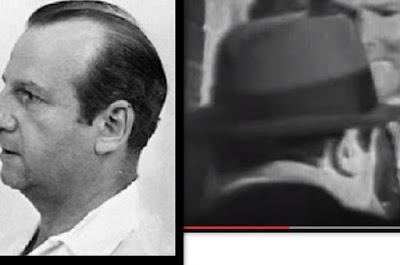 That image on the right is the best view of him that we have. That's the largest area of his face that we see. And, after the shooting, he disappears completely. All we have is chaos, commotion and "noise". We do not actually him again as he is being dragged into the police station. And we never see Oswald as he is being carried away either. None of that is accidental.

Let's consider one more discrepancy between the shooter and Jack Ruby: their height. The shooter was short--very short. We know Jack Ruby's was 5'8". That was at least one inch shorter than Oswald. But, the shooter has to have been even shorter than that. Here's another very famous photo, the Beers photo: 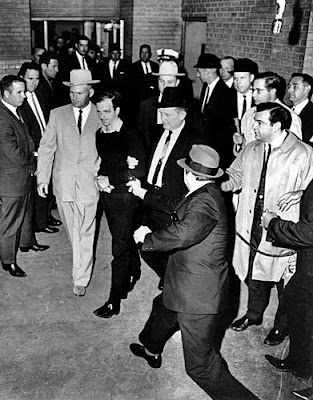 Here is a frame from the video footage of Lee being shot in television footage: 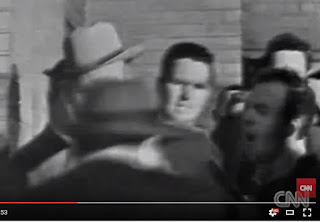 Oswald on the right. The shooter appears to have been shorter than Oswald, but since he also seems to be leaning forward, this comparison is not decisive. And, remember, that the fedora hat is adding to the shooter's height artificially. Look how short the shooter looks here: 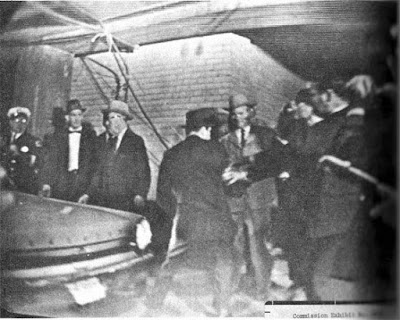 The shooter's stature will arise again when we discuss James Bookhout, who, we believe, is the man who actually shot Lee Oswald. Bookhout was very short, like the shooter, which is a point that appears to have been covered up. But if you were not considering that he might have played such a role, you would not have noticed, which partially accounts for why it hasn't mattered in the past. We all have taken for granted that Jack Ruby shot Lee Oswald!

And Jack Ruby never explicitly claimed to have shot Lee, which in and of itself does not settle the matter. During his testimony to the Warren Commission, he was virtually incoherent. That should have been apparent even to non-experts in psychiatry. The Warren Commissioners cannot have missed it. And he said he had no memory of shooting Oswald. He explained that he remembered going there and that he remembered being swarmed by the police. But he could recall nothing in-between.

The rest was "all a blur." A blur, a blur, a blur! That's what he said, over and over. And, he said that when the police swarmed him, his reaction was to ask, "What are you doing? This is me, Jack Ruby. You know me." Now, if he had just shot someone, would he not have known why they were pouncing on him?  And where and when he got pounced upon? But we don't really know, because it doesn't appear to have happen in that garage at that time.

There are striking parallels between the case of Jack Ruby and the case of Sirhan Sirhan, who likewise does not remember having shot Robert Kennedy. Many have suggested that Sirhan was a CIA MK-ULTRA subject. Could that have also been true of Jack Ruby? Are you aware that the government flew the leading CIA mind-control doctor in the world at the time, Dr. Louis Joylan West, from UCLA, out to Dallas to treat Jack Ruby?

Now, look at the big picture. The space in which the Oswald shooting happened was really no more than a cubby-hole between the building and the ramp to the ramp. The description of it as "a cubby hole" fits because it was closed on three sides and open on just one, the side facing the ramp. 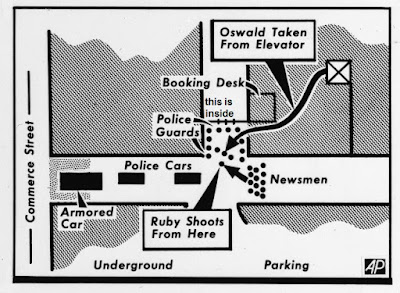 So, the ramp refers to the access-way between Commerce Street on the left and Main Street on the right. And the "cubby-hole" is the indentation there in the center. We don't know exactly how deep it was, but it wasn't very deep.

On this occasion, it was swarming with cameramen. They were on both sides and in the center. And there was at least one cameraman in back, that is, behind the trio of Oswald and his two police escorts, Detectives Leavelle and Graves. That would be the WFAA cameraman, Bill Lords.

But, despite all these cameramen, not a one of them was able to capture an image of the shooter's face where we can distinctly see him. And we don't see anything of the shooter or of Oswald once the melee begins. Before you blame this on the commotion, the chaos, etc., these were professional cameramen.

Think of them like paparazzi. They were trained to capture images--to get the scoop. Their failure to capture a single conspicuous image of the shooter has to have been intended. Such an image would have disclosed the impersonation, because the shooter wasn't Jack Ruby.

And what about the police? As they sought to subdue the shooter, they did not do the one thing that police invariably and indubitably do in subduing a hostile subject: cuff him.

A group of police instead drag the shooter from the cubby-hole area into the building without cuffing him first, which hasn't been done in any other case of which we are aware before or since. Their purpose does not appear to have been to subdue the shooter but to cover him up to conceal his identity and get him out of there as quickly as possible. And that's because he wasn't the man who would be fingered for the crime, Jack Ruby. 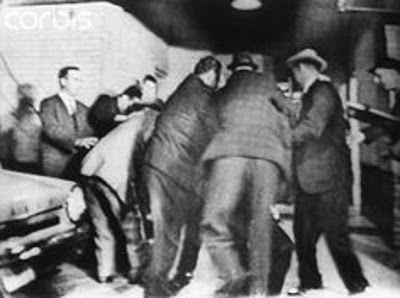 All the footage and photographs show are chaos, commotion, and pandemonium with plenty of curtain shots (of some guy's back sprawled across the screen, for example) until finally, it's over, and Oswald and "Ruby" are gone: disappeared. You shouldn't buy it. You shouldn't accept it. It was all designed to keep us from seeing them. How could so many trained cameramen fail to get a photographic glimpse of either one? It's so unprofessional as to be beyond belief.

If the shooter had a different back of his neck, different ears and different height than Jack Ruby, then the shooter cannot have been Jack Ruby. The first person to have realized they were not the same appears to have been a Russian researcher named Maxsim Irkutz. You can watch his video about it on Youtube:

What we have presented here is a prima facie case that the man who shot Lee Oswald was not Jack Ruby, in spite of the widespread belief that it was. From a logical point of view, what we have laid out would require a convincing rebuttal to be overcome. that most or all of you can accept now that the Garage Shooter was not Jack Ruby. And now we turn to the evidence that identifies that man.

Ralph Cinque, a chiropractor by profession, has been instrumental in securing the identification of Lee Oswald as "the man in the doorway" by emphasizing that his height, weight, build and clothing were the key rather than his facial features. He is also the founder of the Oswald Innocence Campaign.

Jim Fetzer, a former Marine Corps officer and McKnight Professor Emeritus at the University of Minnesota Duluth, has published extensively on the death of JFK and has chaired or co-chaired five national conferences on the conspiracy and cover up in the assassination of our 35th president.
POSTED BY JIM FETZER AT 7:38 AM 0 COMMENTS
Posted by Ralph Cinque at 6:06 AM