I was told once, by someone who knew him well, that Johnny Carson, the comedian and talk show host, when he was on vacation, would wear a low-riding wool hat, and it was perfect disguise, that he would not be recognized. Hats make a big difference.

So, here's a challenge for you: who are these two guys? 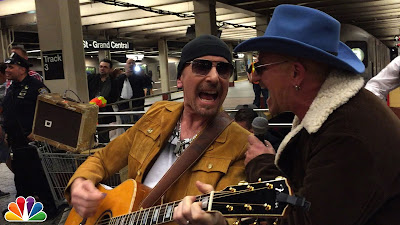 Now, in this case, they're both wearing hats, and they're also both wearing glasses. Yet, we are getting a straight shot of the one guy's face. Can you place him? Think about it a second. Study it. There is no clock ticking. OK, are you ready?

Well, the guy on left goes by The Edge. And the guy on the right is Bono, and both are from the Irish rock band, U2. They are playing in the subway in New York and not being recognized.

And that brings us to this guy in a fedora hat who is said to be Jack Ruby. How do you know from looking at this that it is Jack Ruby? 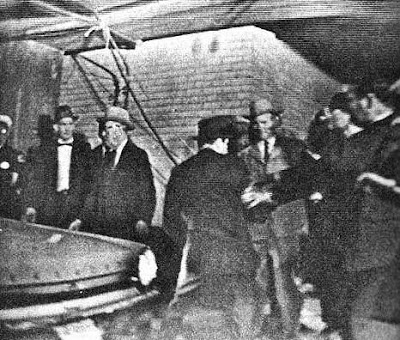 The answer is: you don't. That is, if you are an honest person, you will admit that you can't tell from looking at this that it is Jack Ruby.

But, why did Americans let themselves be duped into thinking that that guy was Ruby? They were never given anywhere near enough photographic evidence to peg the guy as Ruby. No clear-cut images of Ruby shooting Oswald exist. 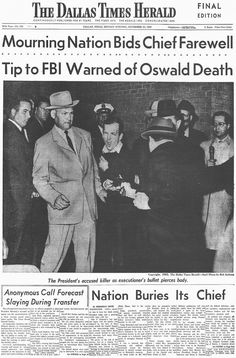 Can't you see that they deliberately gave you an image, so skimpy, that you CAN'T possibly ID that guy as Ruby?

So, the question is WHY did you ever believe that it was Ruby? Answer: Because they told you it was him. That's it. No other reason. The Orwellian State told you that he was Jack Ruby, and you believed them, because you believe Authority. I'm sorry, but it's true. I know it's an insult. And I know that some of you, many of you, are trying to break free of the mind control that the Orwellian State has on you. But, in this case, everybody dropped the ball. And that includes me. It was not until quite recently that I started questioning whether Ruby really shot Oswald. I believed he did for the same reason that you believed he did. I went years and decades believing it because it was the path of least resistance. But now, I am asking you to look at it with a fresh mind. We're at the point in The Manchurian Candidate when Frank Sinatra, as Bennett Marco, says to Laurence Harvey as Raymond Shaw (and keep in mind that Raymond was brain-washed, mind-controlled, and it involved him seeing the Queen of Diamonds in a deck of cards):

We'll see, kid. We'll see what they can do and we'll see what we can do. So the red queen is our baby. Well, take a look at this, kid...
[fans deck and keeps holding up the cards]
Bennett Marco: 52 of them! Take a good look at 'em, Raymond, look at 'em, and while you're looking, listen. This is me, Marco, talking. 52 red queens and me are telling you... you know what we're telling you? It's over! The links, the beautifully conditioned links are smashed. They're smashed as of now because we say so, because we say they are to be smashed. We're busting up the joint, we're tearing out all the wires. We're busting it up so good all the queen's horses and all the queen's men will never put old Raymond back together again. You don't work any more! That's an order. Anybody invites you to a game of solitaire, you tell 'em sorry, buster, the ball game is over.

That, believe it or not, has been described as the most rousing speech EVER given in a film. And it was masterful the way Sinatra did it too. He was one hell of an actor. 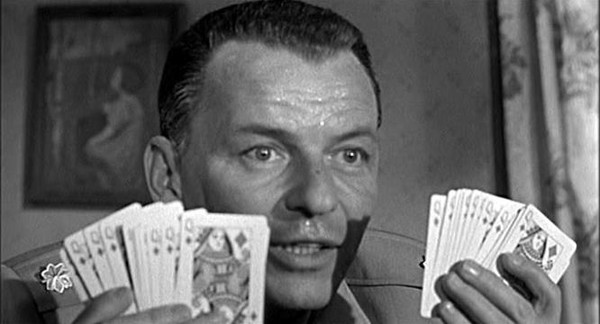 So, you were brainwashed too. You were brainwashed into thinking that Jack Ruby shot Oswald. But, this is me, Ralph Cinque, talking to you. And me and the facts are telling you that Jack Ruby didn't do it. There is NO image of him doing it. Every single image you can cite, from films and photos, is an obscure image which does not come close to identifying the shooter as Ruby. You have the fact that Ruby had NO MEMORY of doing it. His whole attitude was, "They told me I did it, so I assume I did, since they're saying so, but I don't remember a thing." He didn't remember a thing because he didn't do it. And the very fact that there are so many images of the shooter but not one showing enough of him to identify him as Ruby or anyone else is disturbing in itself. Mathematically, you would think that some photographer would have captured a clear, recognizable image of him. But, it wasn't a matter of mathematics or probability or chance; it was a matter of control. Very strict control. The very fact that Dallas Police rushed the shooter out of the garage very quickly and under complete, total cover, without even stopping to cuff him, is another tell-tale sign that it's all a big lie. Policemen cuff violent offenders on the spot. They don't take them anywhere until they are cuffed. They do it before they do anything else. They do it before they even think of doing anything else. And say, they don't have cuffs, and they're waiting for cuffs? Then, they'll push the guy down to the ground and grind a boot and mash his face into the cement. They will not let him budge until he is in handcuffs. And that exception, in the Dallas police garage on November 24, 1963, is the ONLY exception in the entire history of police work in this country going back to 1838 when the city of Boston established the first American police department. No other time. Just Dallas 1963. And what they were doing was scurrying James Bookhout out of the garage before anyone could tell that he was not Jack Ruby.