I would like to review the process by which I arrived at the conclusion that James Bookhout was the real garage shooter of Lee Harvey Oswald.

I already knew that the Garage Shooter was NOT Jack Ruby because he was too short, too round, his hair was too long, and he had too clean and too straight a neckline in back to be Jack Ruby.

What cinched it is finding the footage of Oswald talking to Bookhout in the hallway, which was followed by a view of Bookhout from the back which conformed very nicely with the view of the garage shooter from the back. 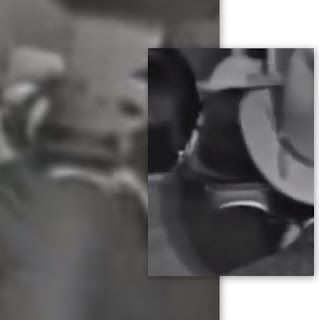 Bingo. Same guy. But, the thing is: I already suspected it. That's the reason I went looking for the footage in the first place. So, why did I suspect it?

It started with this image: of Oswald glancing at the garage shooter a moment before it happened. 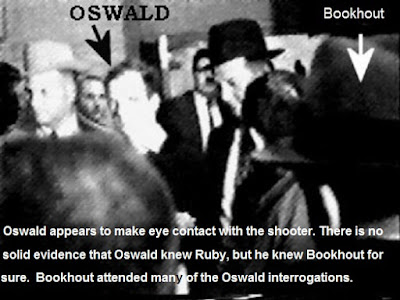 Oswald is looking at the guy who is supposed to be Jack Ruby, and he's looking at him like he knows him. He DID know him. But, he's not looking at him like he's surprised to see him. He is NOT surprised to see him. He expected to see him. So, this isn't someone unconnected to the events of the last two days. It has to be one of the law enforcement personnel that Oswald has been dealing with for the last two days. That's the first thing I realized. I realized from this that the Garage Shooter had to be law enforcement, either a Dallas detective or an FBI agent.

I first considered Detective Charles Dhority. After all, he had the right look. For a long time, the Prayermanites were claiming that Dhority was Bookhout, and it was something they got from Linda Zambanini. So, that's why my mind went to Dhority. But then, I found out that Dhority was the one driving the car that was pulling in right during the ordeal. Dhority was behind the wheel. Therefore, he couldn't possibly be the garage shooter.

Oh My God. That set off alarm bells in my head. No images of James Bookhout? When he was following Oswald around for two days?

So then, I went on a very serious and dogged search for ANY images of James Bookhout. I even joined Ancestry.com to see if they had anything on him. And they are the ones who located the yearbook images of him. And they were very helpful. I didn't just use their website. I called them on the phone, and they guided me in how to refine the search to find those images. And then I noticed right away that the yearbook images of him were altered, such as the addition of drag-queen eyebrows. 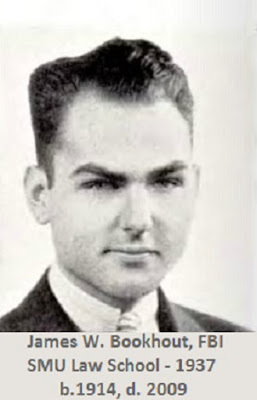 NOBODY has eyebrows like that. You hear me? I said nobody. Eyebrows don't come like that. It would take a lot of plucking and eyebrow-paint to result in eyebrows like that.  And we certainly aren't going to assume that James Bookhout did that as a young man. It is an ALTERED photo- yet another JFK-related altered photograph.

So, at that point, my alarm bells were ringing twice as loud.

Next, I looked to see what Bookhout said about his whereabouts during the shooting. He said he wasn't in the garage. He said he just hung around Fritz' office- doing nothing. He didn't even claim to be sending a fax to the FBI or doing any other case-related work. He just said that he waited there. Then, when word came that Oswald had been shot, he claimed to go down to the jail office, where he saw Oswald on the ground. And then he said he followed behind, into the garage, as Oswald's stretcher was rolled to the ambulance. And, the Wizard found this image of him at that very spot doing that very thing. Look at him, looking guilty as sin. 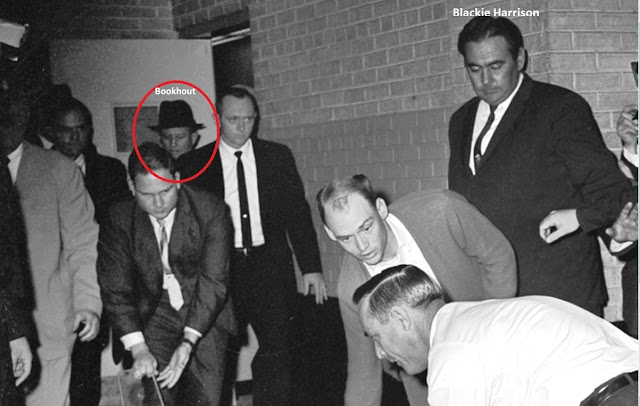 Then, there was the very peculiar image of "Jack Ruby" in the Fred Rheinstein 30 year retrospective in which the Ruby by the elevator with detective Boyd, Sims, and Hall was definitely not Jack Ruby. 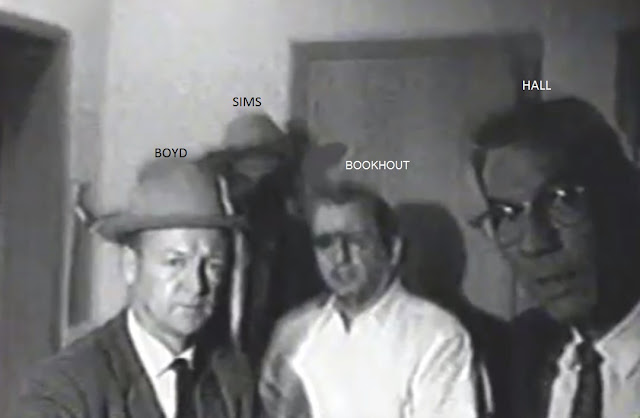 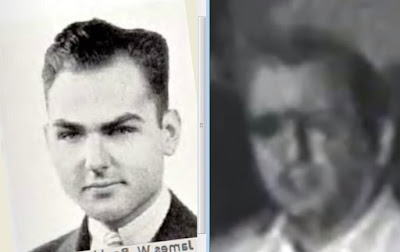 Do you really think that the resemblance of young James Bookhout and 52 year old Jack Ruby would be that great, as good as this? You'd have to be an idiot to think that. That is obviously the same man separated by the passage of 26 years of time.

Finally, there was the issue of Bookhout's height. I knew that Bookhout had to be short to have any chance of being the garage shooter. Strangely enough, I received an email from a retired FBI agent who said he worked with Bookhout for over 25 years and that he was "no less than 6 feet tall." I was reminded of the scene in The Odessa File when Dr. Schmidt approached Peter Miller to tell him that Commandant Eduard Roschmann had died at the end of the war. Jon Voigt's character knew when he was being lied to, and so did I.

We have two references to Bookhout being short. The first is from James Hosty, who said that Bookhout had to stand on a pedestal in the hallway of the DPD in order to look for him. He couldn't see over the heads of the reporters. And the second is from Bookhout himself, who said that JFK rode by him on Main Street, but that he never did lay eyes on him because there were people in front of him.

Then, the Wizard found this image of Bookhout from ROTC in high school, in which it is apparent that he was decidedly short. 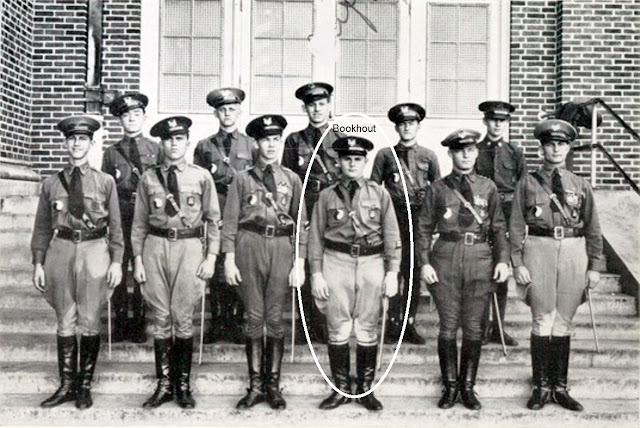 I tell you, the Wizard deserves at least half the credit for identifying James Bookhout as the garage shooter of Lee Harvey Oswald. I wish I could tell you who the Wizard is, but he is concerned about his safety, and I don't blame him. I understand completely.

And this is now on ice. Jack Ruby was NOT even in the garage at the time of the televised shooting. His arrest must have come before. At the time of the historic spectacle, he was undoubtedly being processed on the 5th floor where the City Jail was located. So, it was much earlier that he was at the Western Union office too. They replaced his genuine receipt with a phony one with the falsified time of 11:17.

Jack Ruby was not of sound mind. He was mentally impaired, and they knew that. If he could think straight, they never would have attempted to get away with this. He was an MK-ULTRA-like subject, and they flew in the top MK-ULTRA doctor the CIA had at the time, Dr. Louis Joylan West, from UCLA, to treat him.

Just like Oswald in the doorway, this is a lock. Face it: James Bookhout WAS the garage shooter of Lee Harvey Oswald.