I understand you prefer to go by Wesley, and I apologize for getting that wrong.

I'd like to talk to you about your location in the doorway: where exactly you stood. This is what you said at your March 1964 testimony to Warren Commission lawyer Joseph Ball:

That was exactly right, Wes. It was the first time you were asked that question, and you answered it truthfully and accurately. You were able to do that because it was a direct question that wasn't qualified by any other considerations. Later, Joseph Ball asked you why you aren't seen in the Altgens photo, and that threw you for a loop. You said it was because you were standing back in the shadows. It was that other consideration which caused your mind to reassess and recalculate. But, there was no need to do that, Wes. You had it right the first time. You were standing one step down from the top next to the center railing. 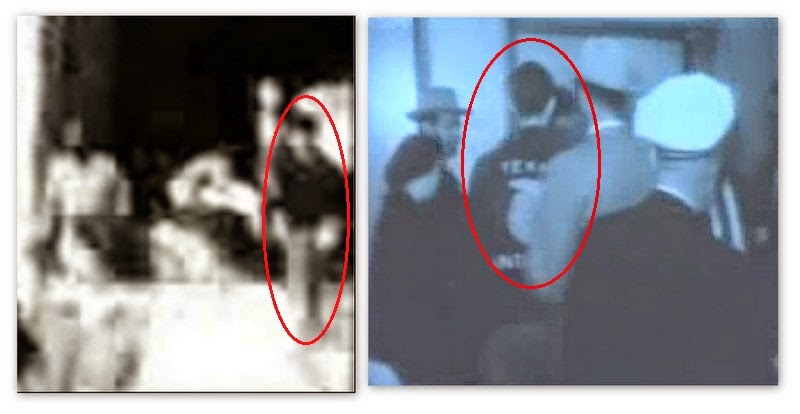 That's you on the left, circled in red, Wes. Of course, it's also you on the right circled in red. Your black hair matches; your black jacket matches; your tan pants match; and your long legs match. The image on the left is from the Wiegman film. You were standing one step below the top and snug against the median hand rail, just as you told Joseph Ball. It was the first time you were asked, and you were asked in an unqualified and uncomplicated way, and so the plain truth came out.

Now, if that's not you, Wesley, then who is it? If it isn't you, then it means there was a Wes Frazier double there that day, and he was wearing your exact clothes. Don't you think you would have noticed him? Especially since he was in that small doorway the same time that you were? It's you, Wes. It's got to be you.

The story got changed to that you were back up in shadows, two or three steps higher, but you were pigeonholed into saying that. The reason you aren't seen in the Altgens photo is because the photo was altered.

But, I'm giving you two things here, Wes: your own words, what you said when you were FIRST asked where you were in the doorway, AND I'm showing the image of you in the Wiegman film which shows that you were exactly where you said you were when first asked.

That settles it, doesn't it?

So, you weren't back in the shadows. You were one step below the top. And, both Oswald and Lovelady were above you. Oswald was the Doorway Man, and Lovelady was next to him; he's the figure we call Black Hole Man because his face is like a black hole from outer space. So, there you have Oswald and east of him was Lovelady. Lovelady was NOT at the bottom, which is what you have been saying lately. Lovelady was on the top on the landing. And you know who said so? Billy Lovelady.

Mr. BALL - You were standing on which step?
Mr. LOVELADY - It would be your top level. 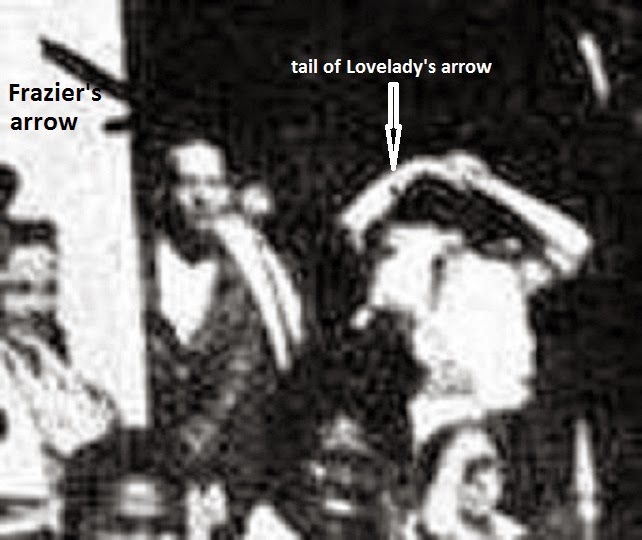 Wes, it's the only other mark on the photo, and there is no other arrow pointing to Doorman. Billy drew a very small arrow within the enclosure of Black Hole Man's arm. He drew it small because he knew it would piss Ball off, and he didn't want to piss him off more than necessary. He knew he was delivering bad news, and he didn't want to do it boldly. He was trying to let Ball down easy. We just got lucky that the tail of his arrow overlapped the flesh-colored forearm of Black Hole Man.

Wes, I'm not saying that you lied then, and I'm not saying that you're lying now. I'm saying that you are a victim. I'm saying that you've been traumatized. I could even say that you've been brainwashed. But, it's not your fault. You've been pigeonholed into believing certain things, and your mind has tried to make sense of it, but in the process, you've had to pound square pegs into round holes. The way out is to look at that image of yourself from the Wiegman film to see where you were; then look at your own testimony; then look at Billy's testimony. You look at what he drew on CE 369. You can get your bearings back that way. You can break loose from the mental straight-jacket that they put you in and have kept you in since November 22, 1963.

I want you to think about something, Wes. They invite you to speak and do interviews at the Sixth Floor Museum. Now, you know what they are about. You know that their job is to support and advance the official story of the JFK assassination, that Lee Harvey Oswald did it alone- the crazed, demented lone gunman.

But, you know that's not true. You have said publicly and repeatedly that you are absolutely sure that the bag which you saw Oswald carry into the building could not possibly have contained that rifle. That makes you an Oswald defender, Wes.

So, why do they invite you to speak there when you are disputing their whole narrative? It's because they feel it's easy enough to sell the idea that you're just a little mistaken about the size of the bag. You mean well, but you remember it wrong. And the thing is that you are such a nice guy and such a gentle person that they feel they can trust you not to be adamant about it; not to be defiant about it; not to go up there and make a big scene about it. If your personality was more like mine, they would know better than to invite you.

Well, I am asking you to dig deep, Wesley: to reach inside and find your inner warrior. I know you want to help your friend Lee, but there is only way you can help him, and that is to recognize him in the doorway. We've got two images of him, Wes: one from the Altgens photo, and the other from the Wiegman film. 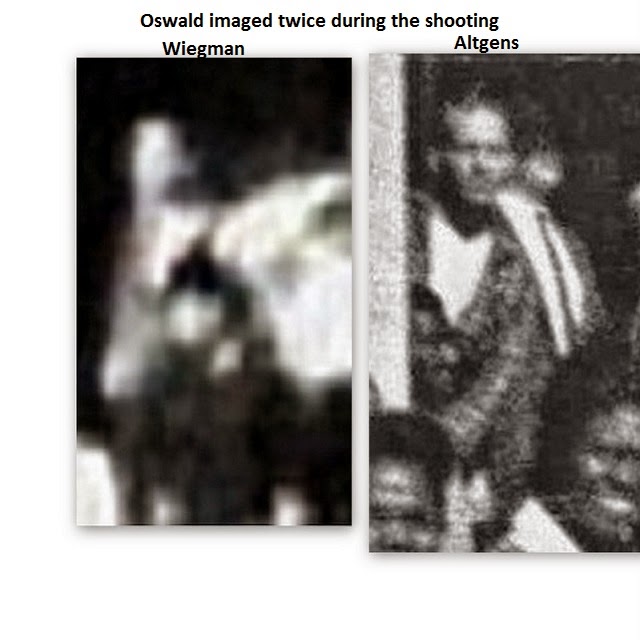 That's Lee, Wes, imaged twice standing in the doorway during the shooting.

Wes, we rarely get a chance to redo things and undo the mistakes of the past. You, however, have that very opportunity. You can right this wrong like nobody else can. They can't stop you, and they can't hurt you either. It's too late. You're too well known, and the internet is too pervasive. Hurting you would be like announcing that the whole official story of the JFK assassination is a fraud.

Besides, we should refuse to live in fear. Don't you agree?

Wes, you're good; you're decent; but, I hope you know that this whole JFK field is teeming with vipers. There are so many shills. But, if you shake loose the conditioning that was forced on you and the tricks that your own mind may have played on you, you can overcome it all. And, the way to start is to look at the evidence- the written and photographic evidence. Look at what I have presented here. It's not too late. You can achieve justice for Lee Harvey Oswald, and at the same time, you'll be achieving it for John F. Kennedy.