Backes, why on Earth would you think this guy was interviewing Lovelady? Lovelady isn't even looking at him. Don't you usually look at someone who is talking to you? 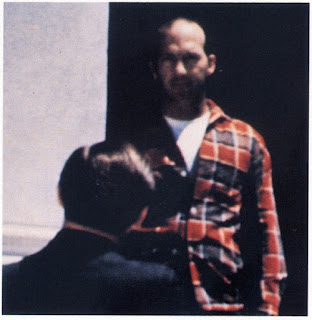 What it looks like is Lovelady posing for a picture, in silence, dutifully fulfilling his phony role as Doorman. There is no reason to think that guy is talking to him. Why is he even in the picture?

And why would they conduct the interview during the shooting? Wouldn't it make more sense to sit down with him afterwards? Doorman wasn't talking in the doorway, so why shoot the film that way?

And Doorman was definitely in the center of the doorway and not over by the west column. 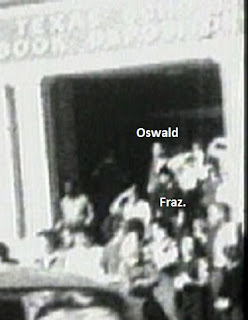 So basically, CBS filmed Lovelady in Carl Jones' position, except even lower on the steps. The above frame was taken within a second or two of the Altgens photo, so there is no basis to assume any relocation. What you see above is exactly what existed in the Altgens photo. You're just plain stupid, Backes.