Thank you, Ramsey Clark and co-counsel. Let there be justice over the Iraq War. The invasion of Iraq by the US was unlawful, which is to say, criminal. The guilty must be made to pay. 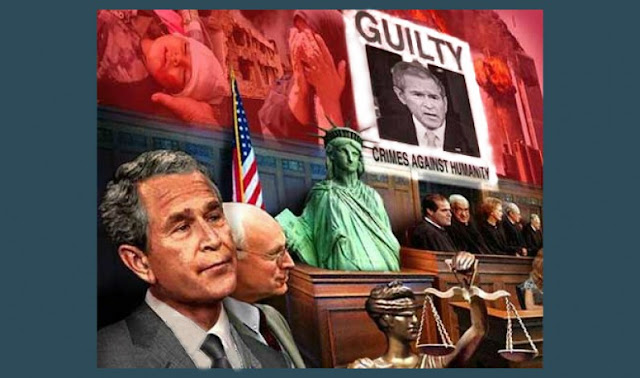 Members of the Bush administration are being sued for their involvement in the Iraq War by an international team of lawyers, one of whom is former US Attorney General Ramsey Clark. The team was assembled by Sundus Saleh, an Iraqi single mother.
“The invasion resulted in the total destruction of a beautiful, peaceful country,” Saleh told Truthout. “The invasion didn’t destroy only the country’s infrastructure, buildings and heritage; it destroyed millions of families and their dreams.”


Saleh’s pro bono counsel, San Francisco-based Comar Law, filed an amicus brief on May 27 urging the US Court of Appeals on the Ninth Circuit to review facts and statements of former President George W. Bush, former Vice President Dick Cheney, former Defense Secretary Donald Rumsfeld and other high-ranking members of the Bush administration during the Iraq War.
Former US Attorney General Ramsey Clark told Truthout that Saleh’s case represents a crucial struggle for anyone concerned with human rights.
The lawyers on the team are requesting that the US Court of Appeals hear Saleh’s claim that the US-led Iraq war was illegal under the international system of law created from the Nuremberg trials in the wake of World War II.
“Ms. Saleh alleges that the Iraq war constituted ‘aggression’ as defined by the Nuremberg trials in 1946,” Saleh’s lawyer, Inder Comar, told Truthout. “She is asking the Ninth Circuit to review the holdings of Nuremberg, which it can do, and to apply that law to the facts leading up to the war. She is convinced, as am I, that under Nuremberg, these officials broke domestic and international law in planning and waging the Iraq war.”
An additional amicus brief was filed by the Planethood Foundation, a nonprofit organization founded by Benjamin Ferencz, the last living prosecutor of the Nuremberg trials and advocate for international rule of law.
Clark argues that the lawsuit is important for the US public and for the rule of law – the principle that the United States is based upon.
Saleh’s case asserts that the highest officials of the Bush administration – including former President Bush himself – waged a war of aggression when executing the Iraq War. It claims that they knowingly issued false statements that Iraq had weapons of mass destruction and ties to Al-Qaeda to manipulate the public into supporting the war.
Posted by Ralph Cinque at 2:27 PM