This is something I wrote within an OIC discussion concerning JFK's actions after being shot, and it addresses the totally idiotic and medically ignorant claims of Dr. John Lattimer. 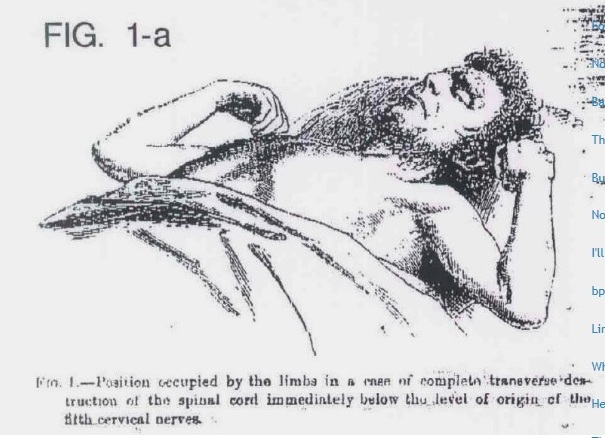 But now, I want to address this Dr. John Lattimer. He was the urologist who came up with the theory that JFK was exhibiting a "Thorburn reaction" or "Thorburn position" based upon a medical paper written in the late 1890s by a London doctor who had a patient who suffered blunt trauma to his spinal cord in the area of C5/C6. If you think of the spinal cord like a piece of licorice, and if you imagine taking a pair of pliers and squeezing the licorice until it's flattened, that's what happened to his patient. He went into complete paralysis except for four muscles in his arms. And over time. those muscles closed up, meaning they contracted to their shortest length. But, it has no parallels whatsoever to what happened to Kennedy, as I'll explain.

Most of your muscles have an opposing muscle which works opposite to it. So, each muscle places a stretch upon its opposing muscle and vice versa. The result is a resting state of "tone" which preserves the full length of each muscle. It's a counterbalance. Another analogy would be two kids of equal weight on a see-saw who balance each other, such that both can be suspended in mid-air without expending any energy.

So, when Thorburn's patient suffered his injury, which was the back of his neck slamming into a ladder, it crushed his spinal cord, and he became instantly paralyzed in all his muscles except the four. But, those four lost the constant stretch of their opposing muscles. Hence, their resting muscle tone was no longer being offset by the stretch of the opposing muscles, and hence, over time, their muscle length got progressively shorter. It wasn't a muscle spasm. It was just the removal of the normal lengthening effect of the opposing muscles.

But, with Kennedy in the Zapruder film, there was no paralysis. His muscles were all working. He raised his hands to his throat because he was shot in the throat. His elbows were thrust out because it widened his chest. There was a bullet lodged in his throat, and it looks like he put his cupped right hand over his mouth and tried to cough it up. It looks as though he pulled on his tie to loosen it.

As I see the drawing of Thorburn's patient, it looks nothing like Kennedy. The guy lived for about 20 days, fading in and out of consciousness but never being coherent. He was lying down, in bed, unable to move, paralyzed from head to toe, except for the 4 arm muscles which were not in spasm. They just shortened over time because of a lack of opposing action. His spinal cord was squished, but Kennedy's was perfectly fine; it suffered no damage at all. So, how could they be the same?

Lattimer's idea that everything we see Kennedy doing after he got shot was all an involuntary neuromuscular reaction- as though he was a puppet being pulled by the strings of neurological reflex- is complete utter nonsense.