Fried chicken vendor David Von Pein put up these two reasons why Oswald must be guilty:

1.) Lee Harvey Oswald's rifle was positively the weapon that was used to assassinate President Kennedy and wound Texas Governor John Connally. (With said weapon being found inside the building where Oswald was definitely located at 12:30 PM on November 22, 1963, when both of these men were wounded by rifle fire.)

2.) Oswald was seen carrying a bulky paper package into his place of employment at the Texas School Book Depository Building on the morning of 11/22/63, and Oswald (beyond a reasonable doubt) lied about the contents of this package to a co-worker.*

1) Oswald did not own a rifle:
https://www.youtube.com/watch?v=V1MFmGkWtgw&feature=youtu.be

But, let's say we didn't have that video. We certainly have the fact that Oswald denied owning any rifle, and David Von Pein must know that Oswald denied owning any rifle. Therefore, the idea that it's "Lee Harvey Oswald's rifle" can't be stated as a given. It's not a card that David Von Pein is holding in his hand. He is just assuming something that is very much in dispute.

And where Oswald was definitely located at 12:30 PM was the doorway of the TSBD, where he can be seen in both the Altgens photo and the Wiegman film. 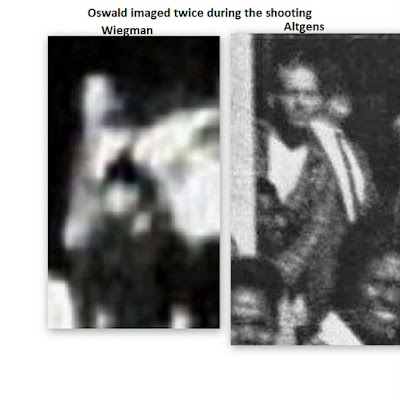 That's definitive proof- something David Von Pein knows nothing about.

2) What Oswald carried into work that day is also very much in dispute. He claimed that all he brought to work was his lunch, and it was something that Police could easily have confirmed by finding his discarded bag in the trash and the remnants of his lunch. You say it wasn't there? Then fine; that would have proven that he was lying. So, why didn't they do it? But, we didn't hear a word about them going through the trash in the domino room and finding, or not finding, any of this.

And, Oswald denied saying anything to Frazier about curtain rods. Why does David Von Pein think he can just dismiss what Oswald said? If Oswald were alive, he would get to defend himself, right? Had he lived, he would have gotten to defend himself at trial, right? Well, don't we, his modern defenders, get to defend him? Don't we get to give him voice? It's all very much in dispute, Peinhead. You don't get to presume anything.

And, contradicting the claims of Buell Frazier and his ditzy sister are all the other employees of the TSBD who didn't see Oswald with a large paper bag that morning as he was walking around the building. How many were asked if they saw Oswald that morning? We don't know. But, don't you think, it's possible, even likely, that if somebody said, "I saw Oswald at 8:10, and I can tell you for certain that he did not have any large paper bag" that that person's testimony would have been conveniently omitted? We are lucky that there is the testimony of Jack Dougherty who said that he saw Oswald when he first came in, and he had nothing in his hands.

Alright, so you've got Buell Frazier and his ditzy sister making one claim and Jack Dougherty making another. That makes it a dog fight, right? So, it's just as accurate to say that Oswald was NOT seen carrying a bulky bag as he entered his place of work that morning as to say that he was seen with one. And since we're only talking about what was seen at his place of work, it's really 1 against 1, Frazier vs. Dougherty. So, what gives Peinhead the right to make his blanket statement the way he did? Nothing! He's just a Peinhead.

Peinhead said, matter-of-factly, that Oswald lied to a co-worker, but why couldn't it be the co-worker who lied and is lying? The co-worker is still here, but Oswald's voice got silenced. But, what do you think Oswald would be saying if he were here? You know what he would be saying, and that's why we have to say it for him.

The case against Lee Harvey Oswald is a joke. It is an embarrassment to jurisprudence. And speaking of jokes, that is what David Von Peinhead is, for sure.