Did Lee Oswald attempt to kill Walker?
On the evening of 10 April 1963, Edwin Walker, a former Army general, was sitting in his study when a bullet entered his house through a window frame and struck the wall close to his head. Dallas police were unable to identify the gunman.
The crime remained unsolved until shortly after the assassination of President Kennedy, when the FBI’s report presumed that Lee Harvey Oswald was the culprit (see Warren Commission Document 1, pp.20–22). The Warren Commission, unable to determine Oswald’s motive for shooting JFK, seized on the attempted shooting of General Walker as evidence of Oswald’s murderous tendencies
The bullet type
The bullet used in the attempted shooting of Walker was probably not the same type as those used in the JFK assassination. According to various newspaper accounts (e.g. ‘Walker Escapes Assassin’s Bullet’, New York Times, 12 April 1963, p.12), the Dallas police claimed that the bullet was a 30.06 calibre; the bullet shells from the Texas School Book Depository were 6.5mm. The Walker bullet was too severely deformed to allow a conclusive analysis of its pattern of grooves. A spectrographic examination by Henry Heilberger of the FBI laboratory found that the lead alloy in the bullet was different from that of bullet fragments found in President Kennedy’s car (FBI HQ JFK Assassination File, 62–109060–22).
The Walker bullet had been fired from a rifle powerful enough to send it through brickwork, which the Mannlicher–Carcano rifle was not. There is no evidence that Oswald ever had access to such a rifle.
Not only did the bullet and rifle have no association with Lee Harvey Oswald, but Edwin Walker was adamant that Commission Exhibit 573, the bullet offered in evidence, was not the one he had examined at the time of the shooting; see Justice Department Criminal Division File 62–117290–1473 for Walker’s correspondence with the Justice Department on this matter.
There were no witnesses to the shooting itself, but one of Walker’s neighbours was alerted by the gunshot and saw two men leaving the scene. Each man got into a car and drove away. The witness, Walter Kirk Coleman, was able to give detailed descriptions of the men and their cars (Warren Commission Hearings, vol.26, pp.437–441 [Commission Exhibit 2958]). After the JFK assassination, Coleman was shown photographs of Oswald. He denied that Oswald resembled either of the men he had seen. In any case, Oswald could not drive.
Robert Surrey, an associate of General Walker, reported that he had seen two men acting suspiciously outside Walker’s house two days before the shooting. Neither man resembled Oswald
Conclusion= Oswald did not attempt to murder General Edwin Walker. 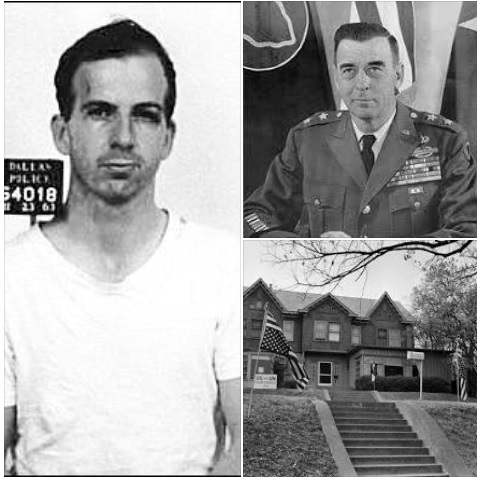