What are the most pressing unanswered question about the JFK assassination?

Well, this is something about which people can have different opinions, and I don't say everyone has to agree with me. Still, I will give you my opinion.

The #1 top, numero-uno unanswered question of the JFK assassination is, in my opinion: What did Oswald give as his alibi for the Tippit shooting? OR, you could put it this way: How did he say he got to the Texas Theater, and when did he say he got there?

The absence of this information from all the notes and reports is a glaring omission. It is simply impossible that they didn't cover it. And it really offends me that they left it out. It offends because they apparently thought I was too stupid to notice that it was missing, that all they had to do was move on, and I wouldn't notice. That is really offensive.

So, what are the possibilities. Well, I don't think he walked to the theater. I don't think his handlers who were controlling him would have let walk to the theater. That's because he could easily have been seen on the sidewalk, crossing the street, etc. by a pedestrian or motorist. If somebody said he saw Oswald at a time that he was supposed to be killing Tippit, what good was that?

So, I think Oswald was driven. Could he have taken public transportation: bus or taxi? Was there even a bus that would have come by going towards the Texas Theater? I don't know, but it seems awfully unlikely, considering how narrow the time window was. But, even if there was, it seems awfully likely that somebody on the bus would have reported seeing him. A cab? Well, he certainly didn't have to call a cab and wait for one, but could he have flagged a passing one down? I suppose, but it seems unlikely, and again: it seems highly likely that the cab driver would have come forward afterward. So, I rate the chances of him having used public transportation at zero.

John Armstrong really thinks so, and I respect his idea. It's no sure thing, but it is an intriguing proposal. It would certainly explain why they told us absolutely nothing. At the time, there was a walkway between the theater and the next building, and John figures that Tippit dropped Oswald off in the alley behind, and Oswald walked through and then down the street to the theater entrance. At his request, I made this graphic for John's website: 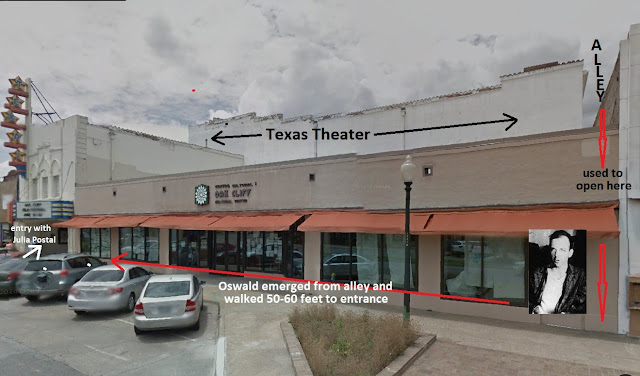 I'll add that no one has proffered any other names, so far, for who could have driven Oswald to the theater. If you've got an idea, speak up. Right now, Tippit's name not only tops the list; it's the only name on it.