No man was ever betrayed by his wife the way Lee Harvey Oswald was betrayed by Marina Oswald. No wife ever came remotely close to betraying her husband the way Marina betrayed Lee. He met her in Russia. He fell in love with her. He married her. He had a child with her. And all the while, the destiny was that she was going to batter him like no woman ever battered a man.

I have to wonder; when he looked at her, did he see it? Was there a sign of it in her eyes that she was capable of such monstrosity, such violence against him?

Of course, she had help. She was surrounded by evil people who were encouraging her to decapitate Oswald, her own husband. They were showering her with money. And really it was an unGodly amount of money for the time, considering what people worked for in those days.

And I suspect that they offered her drugs too, and she accepted them.  But, we are talking about evil, about wickedness from woman to man, the likes of which the world had never seen and probably will never see again. It will never be exceeded. This was the worst wife in the annals of wives.

And I have to wonder what June and Rachel see when they look upon their mother. Do they have an inkling of what she did to their father? How she splattered him against a wall of lies? Her testimony to the Warren Commissioners was a nauseating spectacle of Stalinist showcasing. That's right. From the traditions of her own horrible country, the Soviet Union, she played along with the destruction of a man she once professed to love, the father of her children. EVERY LAST THING SHE SAID ABOUT HIM WAS A GROTESQUE LIE. And she did it for money and to please and win the favor and approval of monsters. The whole sordid history of the thing is enough to make you puke. The filth that this country was then and is now; it is disgusting. And there shall be no forgiveness- certainly not for those men. For Marina, her only hope for salvation is to admit all, to throw herself at the mercy of her daughters, to admit that Lee Harvey Oswald did not own a rifle.  She said it the first day, but she needs to say it again, loud and clear, that he owned no rifle. She needs to admit that everything she said about him owning a rifle and using a rifle was a lie; a despicable, treacherous, revolting lie. Or will she just leave the world when her time comes and say nothing? Yes, that is what she will most likely do.

The blackness of soul, of national soul, and of course, our national soul has only gotten blacker since, as we fall deeper into the miasma of devilry. All these cases of men who have harassed and badgered and forcibly abused women, coming to light in a torrent of revelation in recent weeks. But, where is the revelation about Marina Oswald, about what she did to Lee Harvey Oswald? When is she going to be held to account? How could she do what she did to him? How could she be so evil? 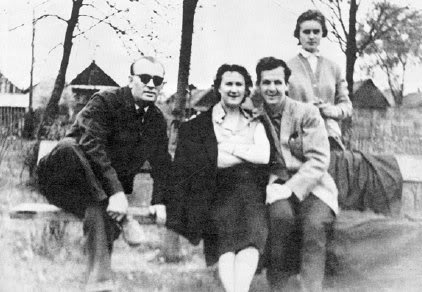 I know the answer. She was surrounded by evil; nothing but evil. And she joined the evil. But, he was her husband. He loved her. How could she do it? How HOW? HOW?