I have found something, and it makes my blood boil. When Jack Ruby said he read this heartbreaking Letter to Caroline in the newspaper on Sunday morning, he then asked Chief Justice Earl Warren if he had seen it, the one who piped in with a reply was Secret Service Agent Elmer Moore who said, "I think I saw it."

First, if the letter was so touching and heartbreaking, wouldn't Moore know for sure that he had seen it if he had? But, Elmer Moore was in San Francisco at the time of the JFK assassination, and he didn't arrive in Dallas until a week later. There were no national newspapers like USA Today in 1963. And you can't tell me that this letter was published in every newspaper in the country on November 24, 1963 because, if so, I'd have no trouble finding it today. So, there is no chance that Elmer Moore saw the letter. He just said that; he made it up; which is to say; he lied. HE LIED!

But, why would he lie about a thing like that? Was he aware that a fake page of newsprint was made and gotten to Ruby?

Let's consider: the year was 1963. If someone wants to send a letter to a newspaper, the only way to do it is to write it up or type it, put it in an envelope and mail it. The assassination happened on Friday afternoon. Kennedy died at 1:00. You can't tell me that writing a letter to Caroline was the first thing on anyone's mind. Eventually, maybe, but not immediately. So, let's say on Saturday, some person gets the idea to write a letter to Caroline. So, he writes the letter and mails it. The very soonest it could reach the newspaper if mailed on Saturday is Monday. So, how does it get published on Sunday morning?

And that occurred to me the first time I read it that for such a letter to be published on Sunday morning when Kennedy just died on Friday afternoon was way too soon. But now that I realize that Elmer Moore, that conniving Secret Service agent who muscled Dr. Perry to change his story about the source of the neck wound, is the one who confirmed seeing the letter, it makes it even more suspicious.

If some staff reporter at the newspaper had written the letter, it would not have meant as much.  And, there was no way Moore could have seen it being in San Francisco. And no way will I consider that he read a 7 day old newspaper when he returned to Dallas. 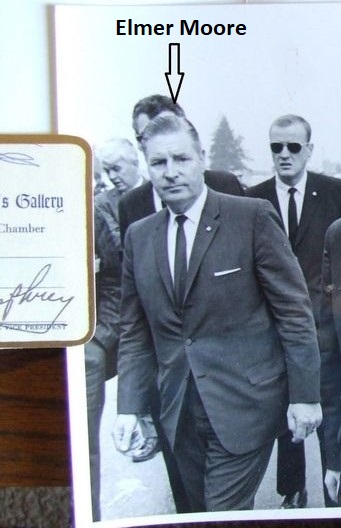 So, the way it looks to me is that they slipped a phony page of newsprint into Ruby's newspaper with this phony "Letter to Caroline" that was heartbreaking. And they did it so that he would be upset by it and rendered more easy to persuade afterwards that he shot Oswald, which he did not do.