Amy Joyce has found GOLD. She made collages of the frames from the shooting, I think it's from the 2nd NBC film, and I'll find out for sure. But, her work proves several things:

1) It proves that the shooting was a hoax because it shows the muzzle flash, which means the shot already went off. So, how could those men not be startled by the sound of the blast? None of them react in any way. It's like it didn't happen; like there was no shot.

2) Oswald doesn't react to being shot, even though the bullet has already, supposedly, torn through him. So, not even a change in facial expression? How is that possible?

3) And, it proves that Oswald did NOT slap his left arm to his chest in response to being shot, as seen in the Jackson photo, because we've got a bird's eye view right here, and he doesn't do it. It simply doesn't happen.

So, let's get started.

Amy has pointed out that there are 3 frames showing the muzzle flash. The first frame shows it dull. The second frame, in the center, shows it bright. And in the third frame, it goes back to being dull.

But, the sound has happened, even by the first frame. So how could none of them react to it? I mean the sound of the gun blast. I don't care if you're a cop. If you're walking along the police garage and suddenly there is a gun blast, it has to shock you; startle you; flinch you like you've never been flinched. But, we're not seeing it here from anybody. And Oswald isn't reacting to having his circulatory system wiped out. And as you can see, he has not begun to slap his left arm to his chest. Let's move on to the next three.

Here we are seeing nothing- no reaction at all in anybody. Nobody seems to be aware that a shot went off, and Oswald seems like his intact self. He seems entire functional, even though he is supposedly totally shattered, decimated in his circulatory system.

Now, it's blurry but Oswald seems to be reacting. I am going to enlarge the middle frame, since it seems to be the sharpest.

So, Oswald seems to be leaning away and grimacing. But, notice that he is not slapping his arm to his chest. And if he was starting to do that, wouldn't the motion of it at least create a blur? Shouldn't we be seeing something? I've been telling you for a long time that the arm-slap in the Jackson photo is FAKE FAKE FAKE. This is not Oswald's left arm. He did not do that. 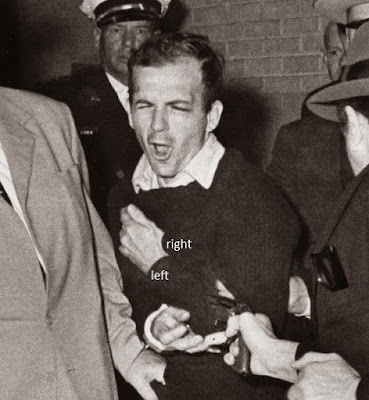 It isn't even one fake arm; it's two; a right and a left.

Let's look at the 2nd frame again because it's the clearest:

Do you see any arm-slapping starting? I don't. Let's lighten it.

He hasn't done anything with his left arm. And why should he? Who's going to slap his arm to his chest from being shot in the abdomen? Nobody would do that, and Oswald didn't do it. He apparently didn't even do it in jest.

And notice that there is still no discernible reaction in Leavelle or Graves. Leavelle does seem to be looking at "Ruby" finally, if you want to call that a reaction, but he hasn't moved a muscle. 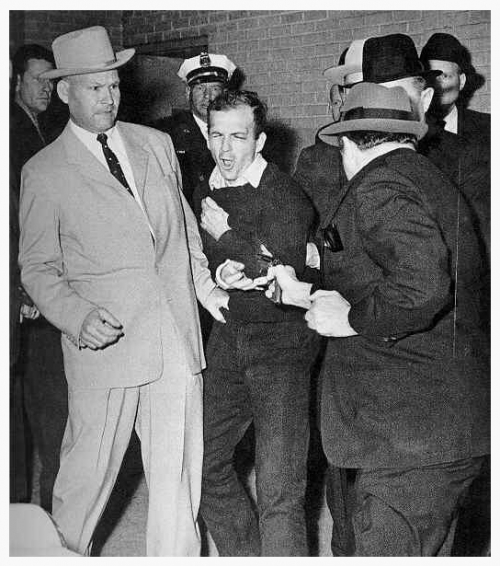