This post about the McCone/Rawley memorandum was written by OIC senior member Craig Roberts, who after being a U.S. Army sharpshooter became a SWAT team shooter with the Tulsa Police. He is also a JFK researcher, the author of Kill Zone and other books, including The Medusa File II, which is about the terror attack in Oklahoma City. You should know that Craig was an official investigator in Oklahoma City, brought in by the FBI. Here are the press photos for The Medusa File II. 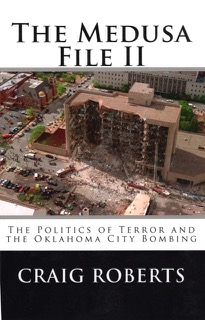 Captions: Photo of the Author in uniform:

Craig Roberts was the only Tulsa police officer assigned to the Oklahoma City Bombing at the request of the FBI. But instead of bolstering what he began to see as a massive coverup, instead he searched for the truth. Who was behind the bombing, who benefited, and why?  The truth will shock the reader, and the facts should change history.
Caption for book cover photo:
The terrible damage that was done to the Murrah Building in Oklahoma City on April 19th, 1995, was not done by a truck full of fuel-oil soaked fertilizer. Bomb experts agree that other charges were inside the building and blew outward! And some of the charges did not go off as planned so much of the building remained—and the charges were found! One must ask themselves “If McVeigh was angry about Waco, why the Murrah Building?”  There is more than one reason, and they are all in the book.


Here is the link on Amazon for The Medusa File II:

And now, below, is Craig's treatment of the McCone/Rawley memo, including a printed transcript of it. It is a very intriguing analysis, and I am glad to see that Craig too admits that Oswald did NOT really go to Mexico City.  RC