I am very pleased to announce that author and investigator Ralph Thomas is the newest senior member of the Oswald Innocence Campaign. 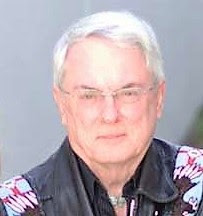 Ralph has a very impressive resume':