I agree with your post about Frazier.  The "story" isn't logical and it's also surely something lawyers would have brought up in Oswald's defense.  Frazier's picture of his re-enactment of Oswald with the rifle/bag (with the "rifle" under his arm, parallel to his body) compared to the picture being paraded by the officer as he walked out of the TSBD doesn't match up.  As you pointed out, the latter looks rather neat and barely used.  It isn't torn and it's also not full of folds and creases.  At least not near as much as it would have been had it been used as Frazier described. 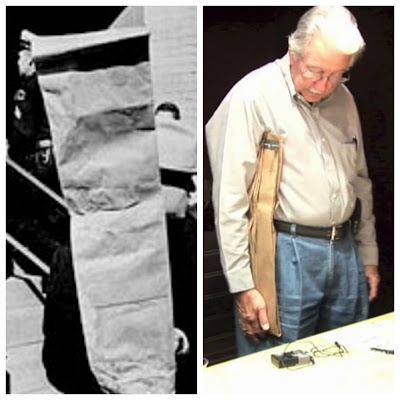 LHO would have had to bring the rifle around with him on several occasions if we are to believe the WC.  To and from General Walker's house and also the shooting range, Oswald supposedly went with that rifle.  Did he make a bag and dispose of it each time?  Surely he'd of gotten a case or something like a gym back by the time of the biggest day of his life.  What about shells - where were they kept?  In his pants pocket along with his change?
This might be coming up in your part 3 but discovering that the Frazier's lived on the same street as the Paine's is too coincidental, especially since Buell was also very recently hired at the TSBD.
How many coincidences and excuses are people expected to accept...and without question?
The SS illegally took the body out of state (it ended up in considerably different condition than what witnesses recalled seeing).
The SS took the limo out of state (it ended up getting rebuilt within days and also different from what witnesses recalled seeing).
The limo was said to have stopped on Elm Street for a short time (oh, people were suffering from trauma and just thought the limo had stopped.  what about people half a block away that wasn't aware what had happened? A couple of them saw it stop).
Smoke by fence?  That must have been witness imagination or occurred from car exhaust.
The different reports regarding the number of shots people heard must have been due to echos.  The number heard just has to coincide with the amount of spent shells found....because.....?
The dozens of witnesses that either saw multiple gunman or saw SS personnel where they shouldn't have been must have been lying.
LHO thoughtlessly left a bread crumb trail of evidence for the police to follow (rifle at the scene, spent shells at the scene, condemning photos of himself with the murder weapons, an old letter to his wife admitting his guilt regarding Walker).  Yet he adamantly denied it all.  That doesn't sound like a man whom figured he'd get caught.
The lack of transcripts or tape recording of Oswald's interviews was due to you know....finance troubles.  We should take the word of proven liars, like Fritz and Leavelle.
I'm sure there is much more, Ralph.  Add to it!