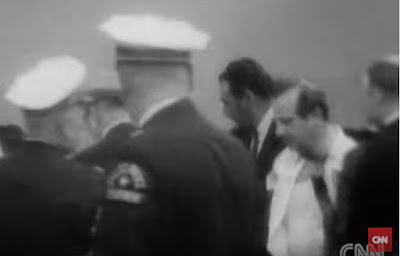 I want you all to realize that this image is gold. It is 14 carat gold. And that's because of what it implies.

First, when was it taken? Well, it was taken soon after the shooting. There is no doubt about that. I have been arguing with the Idiot Backes, who maintains that it was taken just seconds after the garage was cleared. It wasn't seconds; it was more like 2 minutes. But, it's still pretty soon.

But, what it implies is that Ruby is being taken upstairs for the first time, but that is IMPOSSIBLE, and that's because he is out of his jacket, and they did NOT start to undress him in the jail office. That is ridiculous. There is no record of that. There is no testimony in support of it. And, they had no reason to do it. They certainly didn't have to do it to search him for weapons. He could have been patted down for that. But furthermore, since he was put in handcuffs immediately upon entering the jail office, and that's according to three detectives, he couldn't access any weapons anyway. So, there was really no hurry to search him for weapons or fear that he could access one; he couldn't; and that's because he was handcuffed.

So, this photo tells us that Ruby had already been up to the 5th floor. That is where it was when this picture was taken, and that is where he was during the televised spectacle. They left it up there when they brought him down. There is no other explanation.

And that means, of course, that he must have reached the garage well before 11:20. And since he saw Lt. Rio "Sam" Pierce when he came in, it means that Pierce exited in his police car much earlier than he claimed.

Someone pointed out that you can see Pierce exiting in his police car about a minute before the shooting. It's in the KRLD footage. 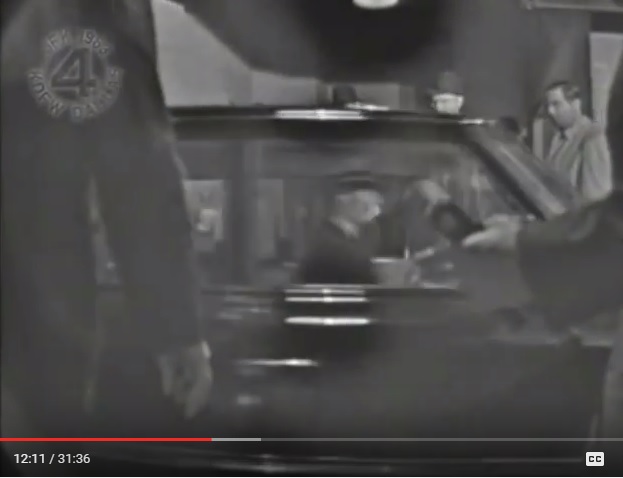 So, that is almost one full minute before the shooting. But, where is he going? He knows what's about to happen, and all these other cops are there to see it. So what, he wasn't interested? What did he have to do that was so important for him to leave just a minute before the spectacle? And keep in mind that it was already a spectacle, even without any shooting. But, I maintain that this image above is part of their cover story. He is driving out there for the sake of the cameras. He is duplicating what he did perhaps 45 minutes before. They had to know that Ruby was going to tell the story as it happened. And, they are going to say it's true except that Ruby got the time wrong. And that is exactly what happened. During his testimony to the Warren Commissioners, Ruby cited the time he was left WU as 10:15. A Secret Service agent quickly corrected him and said it was 11:15, and Ruby did not dispute it.

Mr. RUBY: I did not mingle with the crowd. There was no one near me when I walked down that ramp, because if you will time the time I sent the money order, I think it was 10:17 Sunday morning. I think the actual act was committed--I take that back--was it 11 o'clock? You should know this.
Mr. MOORE. 11: 21.
Mr. RUBY. No; when Oswald was shot.
Mr. MOORE. I understood it to be 11:22.

That's Secret Service Agent Elmer W. Moore, and I'm sure Ruby did not direct the question to him. He just butted in.

Elmer W. Moore, 92, passed away peacefully on Dec. 4, 2001 in Yakima,
Washington. Elmer was born March 17, 1909, in San Jose, calif, and grew up
in Palo Atto, CA. He received his BS in 1934 at the University of San
Francisco. In 1941, he was awarded his BA, with distinction, in Police
Science at San Jose State College. Elmer began his law enforcement career in
1939 with the Santa Clara County Sheriff’s Office. He was appointed a
Special Agent in the US Secret Service in 1942. From 1943 to 1945, he served
in the US Coast Guard Intelligence. In 1945, he returned to the US Secret
Service and proudly served his country under 7 presidents, until his retirement
in 1976.

Look what I found out about Moore: