No, Backes, you idiot. Ike Pappas is the one who said he got a business card from Ruby- not the other guy. Even David Von Pein says so:

David Von Pein: "It's an amazing (and very rarely heard) audio clip. Pappas exclaimed excitedly on the air: "He (Ruby) runs the Carousel Club?! ... He handed me that card the other day!"

Seth Kantor was even a witness to it, and he testified about it to the Warren Commission:

Seth Kantor: "Sunday afternoon District Attorney Henry Wade was to say to the press that Jack Ruby was present Friday night during that strange press conference. I understand or I am told.
A New York City radio reporter, Ike Pappas, corrected Henry and said that he, Pappas, had been talking with Ruby in the assembly room and Ruby had given him a card and had invited him to be his guest in the Carousel when it reopened. Pappas still carried the card in his wallet; said that he brought Ruby over to the District Attorney and that the D.A. seemed to know Mr. Ruby. Henry smiled but gave no answer, after first saying that Ruby was mistaken for being a reporter. The time which I referred to here that Mr. Wade smiled was when Ike Pappas reminded Henry Wade on Sunday that he had talked to Ruby on Friday night."

It is not in doubt or in question that Pappas interacted with Ruby, face to face, on Friday night and received a business card from him. But, upon seeing the Garage Shooter in the garage, Pappas did not recognize the man as Jack Ruby. Pappas is circled in the Beers photo below. 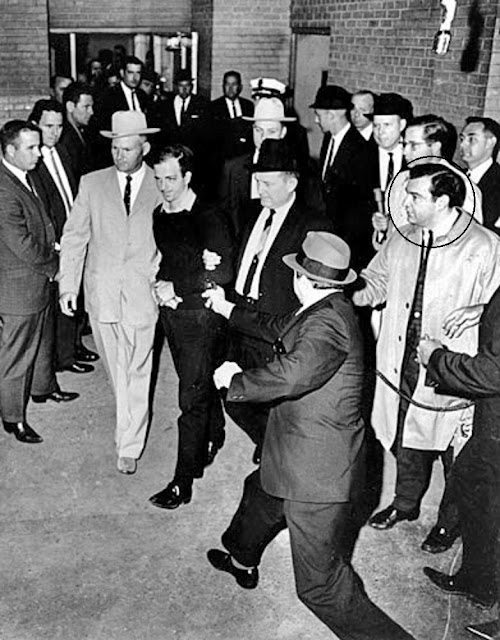 Fact: Ike Pappas met Ruby on Friday but did not recognize the Garage Shooter as Ruby.