- show quoted text -
And here's where you fantasy falls apart. There's no evidence whatsoever
that Ruby showed up at the garage an hour earlier. In fact, the time stamp
on the Western Union $25 money order he sent to Karen Carlin (aka Little
Lynn) in Ft. Worth that morning was time stamped at 11:17 AM 11/24//63. By
your theory, Ruby was already in custody, yet the physical evidence and
witness testimony proves he was in the Western Union office at 11:17. You
desperately want to believe that Officer Vaughan and Lieutenant Pierce
lied about when Pierce drove out of the garage via the Main Street ramp,
but the video evidence corroborates their testimony that Pierce drove out
one minute before the shooting, not an hour before it. If Vaughan, as you
say, lied in his testimony, why was he reprimanded by the Dallas Police
Department immediately after 11/24/63. After all, if he purposely let Ruby
into the garage, he would have been doing exactly what his superiors
wanted. You "think they (Pierce and Vaughan) deliberately let Ruby into
the garage", but you have absolutely evidence whatsoever to back that
claim up. You think James Bookhout shot Oswald, but you have no credible
evidence to back that theory up. I'm sorry, but neck hair images and
questions about how his jacket managed to get pulled off in the scuffle is
not credible evidence. Heck, you can't even prove what James Bookhout's
real height was. I'm not trying to be mean, but you're the worst kind of
Conspiracy Theorist there is. You take blurry images, misstatements, and
poor recollections and try and twist them into real evidence of
conspiracy. Your theories are so far off the mark from reality you give
CT's a bad name. When presented with real physical evidence and
corroborating eyewitness sworn testimony, you throw it all out as forgery
and lies, because it doesn't support your twisted narrative; this despite
having no credible scientific analysis that has concluded photos and films
were forged, and no credible evidence whatsoever that the Dallas PD
conspired to murder Oswald. You're whole Bookhout shot Oswald theory just
got blown apart because you admitted that Ruby entered the garage via Main
Street, and the evidence clearly shows he did so one minute before the
shooting, which means he couldn't have been, as you've stated, already in
custody, up on the 5th floor. All this malarkey about Ruby's jacket, and a
90+ Jim Leavelle's mistake about the double doors being in place on
11/24/63 is now just deflection and grasping for straws on your part
because it's been proven in this thread and others that the Bookhout
theory is a load of baloney, dreamt up by someone that likes to draw
attention on themselves by making the most outlandish accusations. You
know exactly who that someone is. The Bookhout theory is DOA.

You want to talk time stamps, do you? Ruby's receipt got stamped before the wire was even sent. The time of the wire transfer was in the minute after the time of the receipt. And that is ridiculous. Of course the receipt would be the last thing issued and stamped. Phony pKvMKkwvmc&t=251s 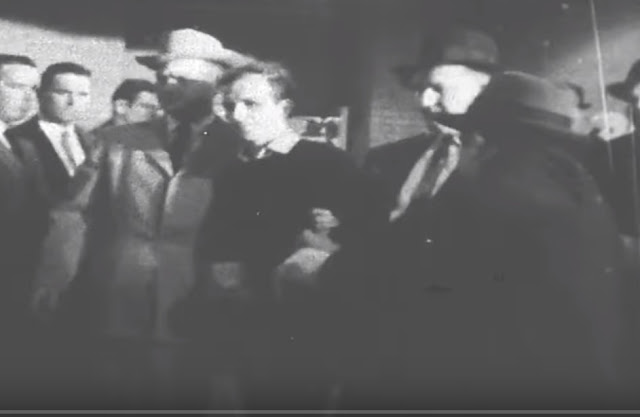 And I don't doubt that Pierce drove out a minute before the shooting, but it was his second trip. He was also there when Ruby showed up, which was earlier.

This is the space occupied by two cops and a police car, and they didn't notice Ruby go in.

Again: two cops and a squad car in the space, and Ruby got past them. And he said, incidentally, that he did not try to be evasive. He didn't sneak in.

And what about the other spectators who were here? Why didn't they say anything, such as to Ruby, "Hey, Buddy, you can't go down there." Or to Vaughan, 'Hey, Officer, that guy is going down there."

No civic-minded people there, huh?

The fact is that there was a cop there assigned to keep people out, and then another cop showed up in a cop car, and Jack Ruby was able to enter. Perhaps you are content to just call it incompetence. But, I think an 80 year old WalMart greeter could have kept anyone from entering that ramp. 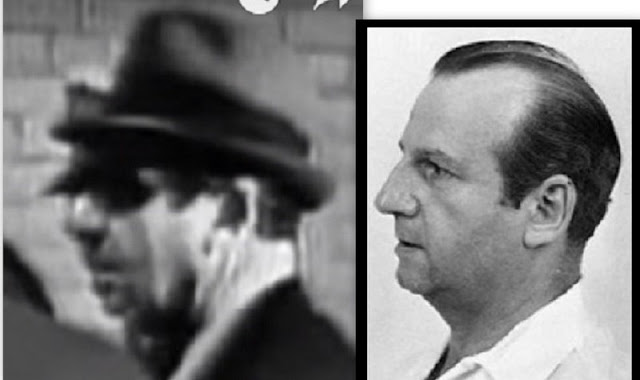 That is a night and day difference, and if you're willing to shrug your shoulders at it, it reveal a lot- about you.

Sworn testimony? You figure people don't lie when they're sworn in, do you? Above, look at the distance between his sideburn and his ear on the left. Now look at the Ruby on the right. That's another deal-breaker, and keep in mind that only one is required.

Ruby definitely was already in custody up on the 5th floor during the televised spectacle. And that's why his jacket is missing because they left it up there. It's the only place it could have been. They did not start disrobing him in the jail office. Repeat: they did NOT start to undress him in the jail office. And the sworn testimony supports that.

Ruby arrived earlier and was disposed of quickly, rushing him up to the 5th floor. Then they brought him back down to walk in front of the camera. It was his first appearance before the camera. 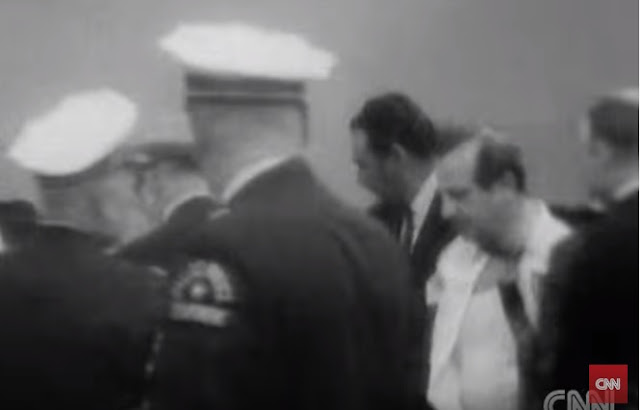 James Bookhout was most certainly short, and his own testimony supports it. And it's one of those things that is a matter of fact. Do you think that if his son Jim Bookhout was sworn in on the witness stand, and opposing counsel asked him, "how tall was your father?" that he's going to lie about it?  And not everybody is a good liar.

This scenario, that Ruby got there early, was arrested early and was up on the 5th floor at the time of the shooting, is supported by the objective evidence, such as the image above. And you have cited nothing to disprove it. Paperwork it the easiest thing in the world to fake.

And regarding Leavelle and his lies, he lied on Day 1, the day it happened. You can listen to him lie here. He stated that he saw Ruby in advance, ID'd him as Ruby, saw his pistol, jerked Oswald and turned him, and shoved at Ruby. All lies. Leavelle did not react in any way until after the shot.