Wow. Of all the places to get involved in teaching 9/11 truth at the scholastic, academic level, the University of Alaska at Fairbanks?

Well, it is happening. Dr. J. Leroy Hulsey, the Chair of their Engineering department is into it, and he has begun a two year study on the collapse of Building 7. If you recall, that's the building that was never hit by a plane. Yet, it fell into its own footprint in near-perfect symmetry, through the path of greatest resistance, in 6.5 seconds, according to the available video evidence.

The Architects and Engineers for 9/11 Truth are sponsoring this study.

Dr. Hulsey is a professor at the University of Alaska Fairbanks (UAF) and the Chair of UAF’s Department of Civil and Environmental Engineering. He brings decades of experience in failure analysis and modeling of structures. 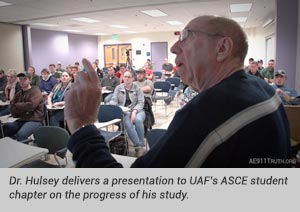 In May, he and his team of Ph.D. research assistants began a two-year process of modeling WTC 7. Using the sophisticated computer models they are developing, Dr. Hulsey and his team will evaluate the probability of various hypothetical causes of WTC 7’s collapse.

AE911Truth, backed by our 2,390 architects and engineers, is funding Dr. Hulsey’s research because it is imperative to our mission that WTC 7 finally be modeled in a transparent and unbiased process — and that the findings be disseminated to every corner of the engineering community. Already we’re seeing tremendous interest in the study, as several local engineering groups have invited Dr. Hulsey to speak about his work.
When awareness of the study spreads throughout the entire engineering field and Dr. Hulsey begins to publish his findings, it will be a turning point in how the destruction of WTC 7 is viewed — both within the engineering world and beyond.
What's amazing about this is that this is a public university, a government school. NIST already said that Building 7 collapsed due to "office fires." Burning furniture and whatnot. So, if Dr. Hulsey's study proves that wrong, who is going to be in the hot seat?

Truth is rising! They can't stop scientific thought, and they can't kill all the scientific minds that are out there laying out the scientific truth about what happened. And now, it's happening front and center at one of the government's own schools. There shall be a reckoning.