Another researcher, whom I shan't name, has created a negative of the bogus hat photo and made some comments about it. 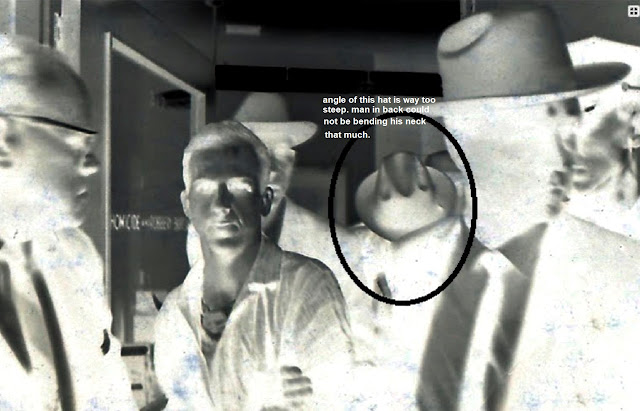 To wear a hat like that in such a way with the hat being so low, you'd have to cut eye holes in the top of it so that you could see where you were going. Typical rush job, had they taken a couple minutes to analyze the position of the head, where the hat would naturally be, they might have pulled it off, but they were lazy and stupid, figuring that dumb Americans wouldn't notice or care.
Also, how did the hat get the prominent 'halo'? (evident in the inverse / negative) view???  absolutely does NOT belong there, more proof of shitty CIA hacking of the original by the addition of obfuscatory bullshit.
Since nobody would lower their head that much, odds are very great that that is the back of the hat we are seeing. It's the only way they could have done it because the image of a front-facing hat would not work, it would not orient properly to over the face. And it would never cover it so completely.  So, we are seeing the hat from behind, and there is no doubt about it.  Total shit job here.  It looks very fake.