No. And keep in mind that if he had, Ruby would have admitted it. Why not? He was taking the blame for shooting Oswald, so why lie about working for Nixon? Plus, Ruby was a blowhard. He loved to talk. He loved to brandish his connections. He would surely have admitted it. But, in the autobiography that he wrote with the help of that television scriptwriter, he said nothing about working for Nixon.

This is from Jefferson Morley of JFK Facts:

Jean Davison noted that a “letter from Nixon mentioning a ‘Jack Rubenstein’” has been around for a long time. The document in question is not exactly a letter, nor is it “from Nixon.” Rather, it is sworn statement, dated Nov. 24, 1947, from a staffer (identified only as ‘LS”) who asserts that “Jack Rubenstein of Chicago” was “performing information functions” for Nixon’s staff and should not be called to testify in open hearings by the House Un-American Activities Committee.
Long ago, when Hoch was more conspiratorially minded than he is now, he wrote that he thought the letter was a forgery.
In 2006 Gary Buell posted a detailed commentary on questions about the document’s authenticity. One key point of dispute is the letterhead on the document that includes a five-digit Zip Code — a system not adopted until 1963.
“Even if it’s real,” Davison says, “the Jack Rubenstein mentioned is almost certainly a different person, a prominent member of the Young Communist League in the 1920s whose death was reported in the New York Times, July 8, 1989, p. 29. (“Jack Rubenstein, 81, Labor-union Official.”) This Jack Rubenstein helped organize a textile workers’ strike in New Jersey in 1926, when “our” Jack Ruby would’ve been 15. He later broke with the CP — which would explain why the Nixon letter says he was “a potential witness” for the HUAC.”
This letter is fake. They didn't even have 5 digit zip codes in 1947, which this letter has. 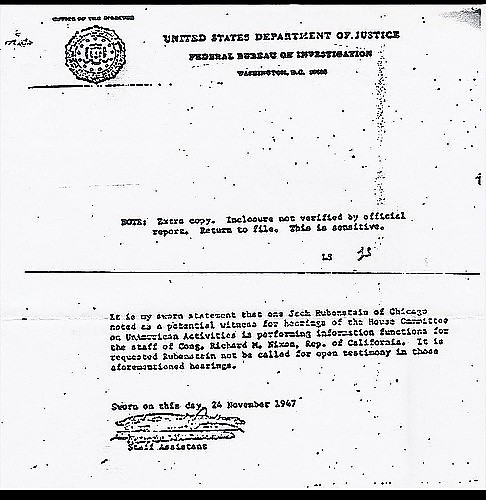 So, do you know what this tells me? It tells me that the whole "Ruby worked for Nixon" claim is just a baiting, battering, and buttering up of the buffs thing. It's just more of the false and phony lure about Jack Ruby, the invented biography, that he was gangster, a pimp, a guy who threw people down the stairs, a gun runner, and an operative for Richard Nixon. In reality, he was just a nightclub operator in Dallas who got a thrill out of being friends with the Dallas Police. Most of what you hear about Jack Ruby is patently false, including that he shot Oswald.