So, the Wizard has assembled his favorite images which he feels prove that not only was the Garage Shooter not Jack Ruby, but he was, in fact, FBI Agent James Bookhout. And keep in mind that there are absolutely no images of James Bookhout from the JFK assassination, even though he followed Oswald around like his shadow. A few months ago, a pack of liars, threw this picture into the blogosphere claiming it was Bookhout. But of course, it was never vetted by anyone in an authoritative position to vet it, such as Bookhout's son. And I sent it to his son and asked him if it was is father, and he never replied. Supposedly, it's the guy smoking the pipe. But, let's consider the "story" of this picture. That's Will Fritz in the white hat and dark suit talking to detectives, and supposedly, Bookhout wasn't even paying attention. he was too busy smoking his pipe. But, that doesn't make sense. Bookhout was the official FBI liaison to the Dallas PD. They had worked on many cases before. And, Fritz was allowing Bookhout to attend, not some, but every Oswald interrogation. So, what are the chances that Bookhout wouldn't be listening to what Fritz was saying? The chances are none. And what evidence is there that Bookhout smoked a pipe? There is none. It's not as though pipe-smoking was a common enough practice that we can just assume that he was a pipe-smoker. And remember, Bookhout being FBI, he was a guest there. This was the Homicide Bureau of the Dallas PD. So, what are the chances that he would light up a pipe? You realize that a pipe has to be packed first, right? So, he did that there in the office? He took the time to do that? Took out a pouch of tobacco and packed his pipe? Right there in the office? And then started smoking it? Are you aware that pipe tobacco produces a very aromatic smell? And that was an enclosed area. What are the chances that Bookhout would do such a thing? THEY ARE NONE!! Do you hear me, mudderruckers?

The truth is that Bookhout wouldn't do it, and I doubt that anybody would. I'd be willing to bet that the image of that pipe-smoker is fake. That photograph probably existed without him in it. 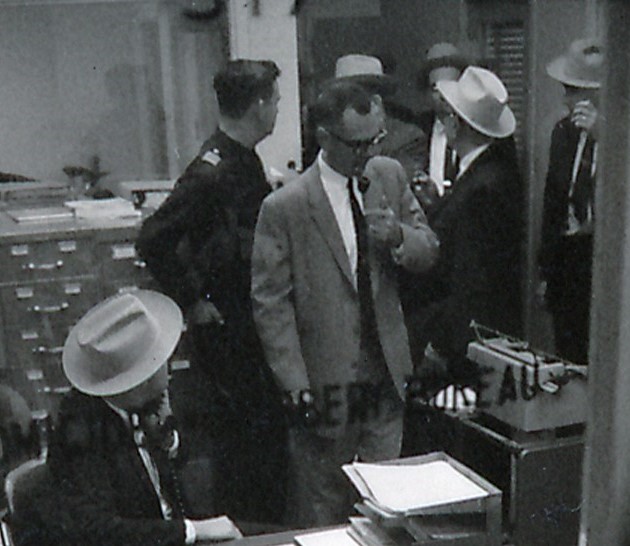 Look at the guy seated who is closest to us. Doesn't he appear to be looking at Fritz? But, how could he see him if that pipe guy was there? He can't see through him, can he? Notice that the whole focus of this image is the men looking at and listening to Fritz. Nobody seems to be aware of the pipe-smoker. He's like Lovelady in the squad room, where no one but no one seems to be aware of him- a fake, implanted image. I'd bet the same is true of this one.

You see the man sitting at the desk. It's a standard size desk, isn't it? Do we have any reason to assume otherwise? I put a white k for where the pipe-smoker's knee is. 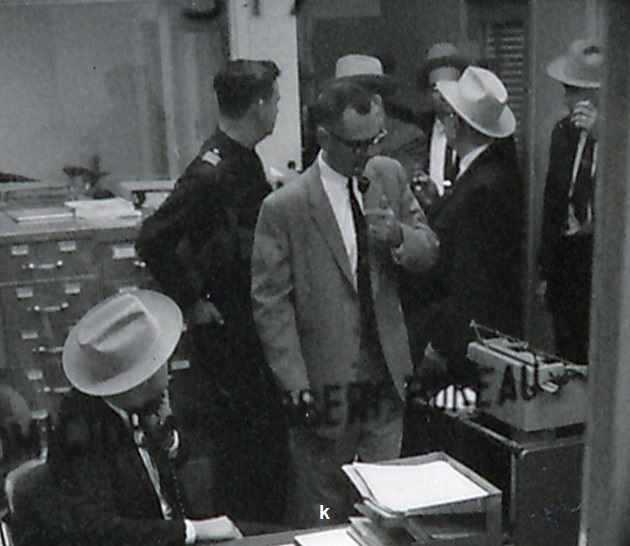 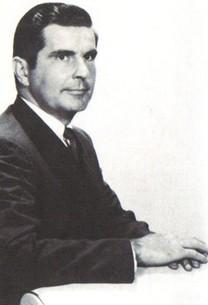 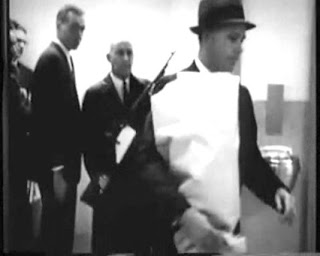 So, what are the chances that James Bookhout wore a suit this light? There isn't a snowball's chance in hell that he did.

But, think about it: the people foisted this false image of Bookhout, they would never have identified another man who was there as Bookhout. There would have been too big a chance of me finding out his real identity. If that guy was really there, then he would be identifiable. They weren't going to take a chance like that. It's a phony image. That guy was put into the image. And, who knows if he existed at all? Maybe he was computer-generated. And if that guy was really Bookhout, and it was as easy as that to capture his image, why wouldn't there be a lot of them. Did I mention that he followed Oswald around like his shadow?

The stinking Prayermanite Bart Kamp suppoedly "found" this image. Found it, did he? Where'd he find it? And how come in 54 years, it wasn't found before?

What a despicable thing to do, to concoct this image, and specifically I'm sure to combat me, the Wizard, and others who are shouting from the rooftops, that Jack Ruby was innocent, that he was NOT in the garage during the spectacle, and the short chubby guy wielding the gun was FBI Agent James Bookhout.