Were they, the perpetrators, prepared to alter photos on November 22? There is no doubt that they were, and that's because of the existence of the Backyard photos. 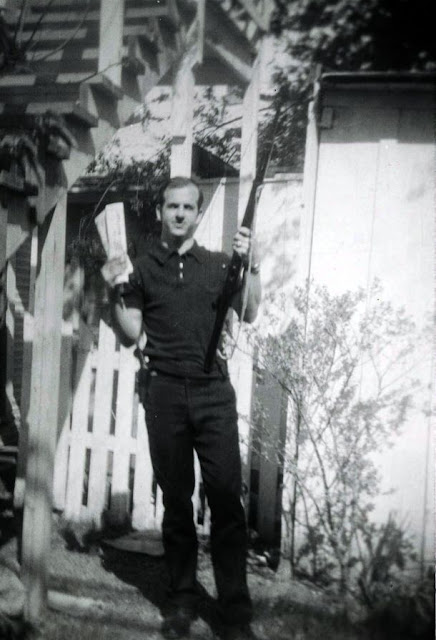 I am speaking now to all Oswald defenders. You know that Oswald was shown this photo. You know that he denied posing for it; that he denied ever ordering, owning, or laying eyes on that rifle, let alone using it or handling it. And he, Oswald- our man Oswald- said that that is an altered photo in which they put his face over the body of another man. He also said that, from having worked at a photo lab, he knew how it was done, and he could demonstrate it.

Now, he said all that, and there is no doubt about it. The question is: do you believe Oswald? Because if you don't believe him; if you think he was lying, then how can you call yourself an Oswald defender?

Now, I realize that it is possible to pose for a photo with a rifle and not be the one who actually used it to kill somebody. But, the thing is that Oswald knew that too. Give him credit for being smart enough to say, "Yes, that's me, and that's my rifle, but I didn't shoot anyone with it."

So, if that was the case, Oswald surely would have said it. But, he said he did not order or own that or any other rifle and that that is NOT him in the photo.

You have to believe him. And if you don't believe him, then own up to what you really are: an Oswald accuser. And then: get the hell off my blog.  I'm not interested in you. I don't care what you think. And I don't want your readership. If you think I'm crazy, why are you reading me? Why don't you go elsewhere and read people you respect? I won't be offended.

So, hopefully, there is no one left but real Oswald defenders.

Who specifically did it? I wouldn't be surprised that Dino Brugioni was involved. He was the CIA's top photo man. He wrote a book on photo fakery, which I have. And he provides examples from the Nazis, the Soviets, and even the American Civil War. He did not cite any modern examples by the US government or CIA.

How was it done? This is from an expert:

"When retouching was needed, typically an oversize print was made (at least twice the size needed for the final reproduction) and it would be airbrushed to perfection."


OK, so let's get to the definition of airbrushing:

In photography, the term "airbrushing" refers to any retouching done to a photo that changes the reality of the photo. It may include removing people or objects, erasing acne or scars, altering body shapes, or any other form of manipulation of the original photograph.
Prior to digital photography and the introduction of Adobe Photoshop and similar programs, airbrushing was done by hand. Artists were tasked with cleaning up photographs manually.
They would use airbrushes as well as paint brushes, dyes, and other materials to correct any imperfections. It was a skill that took great talent.
Today, airbrushing is primarily done with the computer and it's often grouped into the category of "retouching." Yet, you will still hear the term used, especially when discussing models who seem to have flawless bodies in advertisements.

The History of Airbrushing

Before digital photography brought about digital editing, negatives and prints were altered directly through a variety of techniques. Airbrushing was probably the most popular of these techniques.
In the early days of photography, retouching was often needed due to limitations of the plates and cameras used by photographers. Especially with the  Daggeuretype just before 1840, touch up was needed to create high-quality images. Until the 1860s, hand brushing was the most common technique for altering photographs.
This often left visible brush strokes in the resulting photographs.
In the 1890s, airbrushes were developed and photo retouching changed forever. Camera equipment was continually improving and the new capabilities for smooth edits with airbrushes led to an incredibly high demand for photos with moles, scars, and other imperfections removed.
Also highly popular were large oval airbrushed with color. Keep in mind that color photography was not available until the 1930s, though people wanted their portraits in color, just like paintings. Artists would tint the black and white photos using airbrushes to mimic the look of a full-color portrait. Demand was so high that factories were built to handle the demand for airbrushed photos.
The continued improvement and availability of cameras, such as the Kodak Brownie, reduced the need for professional airbrushing in the United States. In the mid to late 1930s, the Stalin regime in Russia embraced airbrushing as a way to remove "disappeared" people or other out of favor people from official photographs.
Manual retouching continued to be used by professional photographers for portrait and commercial work. Many airbrush artists and professional retouchers continued working with film and paper prints until digital photography came along. At that point, many took their craft to the computer and continued to offer retouching services using the new tools.

While airbrushes have given way to digital editing, the style and technique of airbrush retouching continue to thrive.
Software programs such as Photoshop and many others allow users to edit photographs much more precisely than even the most skilled airbrush artist from the days of film-only photography. Quite often, the term airbrushed has been replaced with Photoshopped.
This advancement in technology has also led to many debates. The ability to manipulate a photo in such a precise manner and with such easy-to-use tools brings up ethical concerns. Has too much retouching on models led to unrealistic perceptions about the ideal body image? Can photojournalists remove an element from a photo to alter the reality of what happened? Are companies using it to create false advertising?​
The question of how much "Photoshopping" is too much is one of great debate in photography today. It has led many people to be very skeptical of nearly any photograph they see.
Their concerns are not unwarranted, either, as cases of unscrupulous photo manipulation have been the subject many headlines.
I sent a professional photographer of some renown my analysis of Altgens photo alteration, and this was his response:
"Ralph, thanks for your email. I can see where you are coming from with this. There was of course no Photoshop in 1963. But, I know hand negative and airbrush retouchers, and this level of manipulation, of which you are asserting, was certainly possible at that time. A good airbrush retoucher can rival with paint anything I can do with Photoshop."

Of course, I have his name, but I am not going to give it because I don't want him to be harassed.

I put up the picture of Kodah Retouching Fluid, and I'll put it up again: 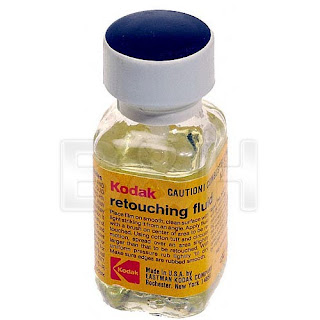 Larry Rivera has established that Ike Altgens dropped off his roll of film no later than 12:50pm.

If it wasn't dropped off until 12:50, then how could the images go out at 1:00 when developing takes a while?

The vast overwhelming majority of newspapers did not publish the Altgens6 photo until Saturday. Now, in contrast, the Altgens7 photo, showing Jackie perched on the back of the limo and Clint Hill riding on the rear step was widely published on Friday. So, if newspapers got both at the same time, why would they preferentially publish Altgens7 instead of Altgens6? Altgens7 just showed the back of someone that the public didn't know, and he dominates the photo so much, you barely register on Jackie. 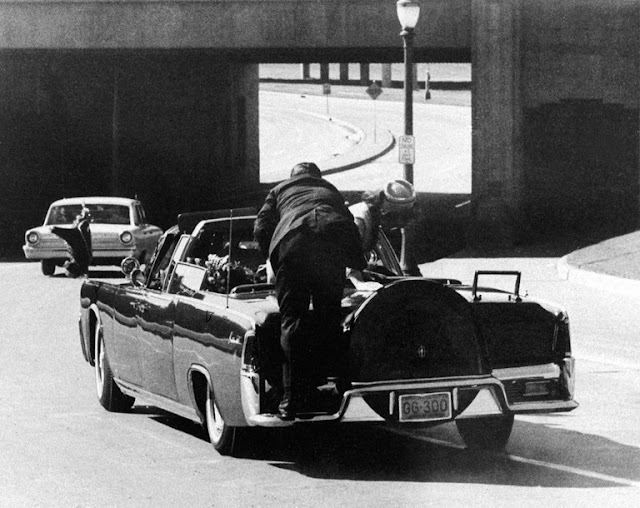 Roy Schaeffer was working as an image processor at the Dayton Daily News when at 7 AM Saturday morning, the Altgens6 photo came in over the wire, and he was the first to see it. Roy told me that he immediately saw the signs of masking, airbrushing, and opaquing, the classic signs of photo altering. And Roy has worked his whole life as a professional photo processor.  And Roy says that the Altgens photo was altered, and he recognized that immediately when it reached his newspaper at 7 AM Saturday morning.