And then my questions were answered. It wasn't a scientific presentation. It was just a response at an open forum on photo.net.

The question at the forum was about "stand development" where you don't shake the can.; where you just let the film soak in the developing fluid without agitation or with very little agitation. Remember how I said that as a kid in my father's dark room, we would shake the can with the film in it for him.

Here is what the guy who started the thread asked:

"The idea of 'stand development' comes up from time to time. Putting film in a developer, often very diluted, and letting it sit for extended time periods. Some say it gives better edge effects and others claim other benefits.Anyone know if there is any reality to the claims or is it a lot like so many forms of development & mythology in B&W... if you think something will happen you are more likely to see that result no matter what reality is?"

So, that is what the other guy was responding to. Someone else gave an example of a very good result gotten by a photographer by letting the film sit in diluted developer "for a couple of days." That's without agitation. Here's how he described the result:

"It is super saturated, rich and pulsing with detail, with rich creamy highlights."

So, he was describing "stand development" favorably. And then the other guy, the first one I mentioned, followed up:

"But, the fact is that some photographers think that better results are obtained by allowing the film to stand in the developer without motion. And that is, presumably, despite the Brownian motion."

It's all very well and good to have this debate about whether stand development is good or bad, but it is not relevant to the Altgens photo because it was not developed with stand development- which can take days. So that guy's point about the edge effects- for which he provided no examples- was just lip-flapping, and it has no bearing at all on the photo we are interested in, the Altgens photo.

Brian Pete loves forums. He thinks people waxing on forums amounts to scientific decrees. So, he went to another forum and found something else he liked. This on a site called photrio.com, and it also concerned stand development- not agitating the film while it sits in the developing fluid. The thread was started by a guy who also likes stand development, who has gotten good but inconsistent results with it. So, he's looking for input on why his results have been inconsistent.  Pete partially quoted this guy, and he's the guy who started the thread.

A bit of theory here. Without agitation the developing agents in the film and just outside the film (about 0.1mm, IIRC) becomes used up. That 0.1mm acts as a barrier keeping fresh developing agents from entering the emulsion. So development stops at that point. Past that point very little goes on, you can actually leave the film setting there for several hours with very little increase in density.Now with increased temperatures, within limits, what happens is the developing agents are used up faster, so developing ends sooner. Those limits, IIRC, are from 60F to 85F. At higher temps Brownian motion starts providing self-agitation.I have let film set for over two hours with no noticeable increase in density, I have not tried to see how soon I could pull it, but I would guess at a point only slightly longer than it takes to process the film by time and temperature with normal agitation at that dilution.As I have said, I have been using this method for a couple of years, and except for the last two batches (of of one roll of 120, and the other of two rolls of 120), all those negatives are about the same density. All at room temperature with no adjustment for seasonal changes. So, I concluded that something has changed without my being aware of it, and came here where I felt the experts were for help. What I get is told that two years of experience is wrong.Now, I have read a lot about stand developing on the web, and in almost every case I noticed that the person trying it could not believe it did not need additional agitation, so did not actually use stand developing. The few that did not do additional agitation reported the same results I have had. Once you get into having to do temperature control outside of broad limits, stand development loses all of its advantages, and you might as well go back to time and temperature. Which all those saying I do not know what I am talking about, seem to have done.For anyone reading this thread, wondering about stand development, don't take anyone's word for it, try it yourself. The simple fact is that we can all be right, slight changes in the system can account for the differences mentioned here.

RC: Keep in mind that this guy is in favor of stand development, and he even said that at temperatures higher than 85 degrees F, Brownian motion does some agitating for you.

But, none of this has any bearing on the statement of Judyth Baker that Brian Pete is trying to defend: 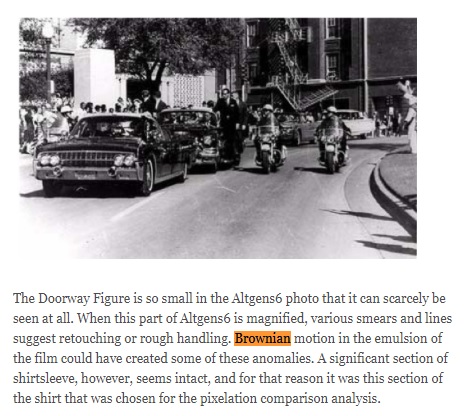 Brian Pete thinks that Judyth Baker is full of shit about Oswald but knows what she's talking about when it comes to chemistry and photography- and he'll defend her to his dying breath. She claims there that "various smears and lines" in the doorway area of the Altgens photo, which she says are "anomalies"  but could have been caused by "Brownian motion in the emulsion of the film." In the emulsion? Well, is she even talking about the developing process? Or is she just talking about the emulsion? Who knows? But, the issue at stake is this bizarre photographic outcome. 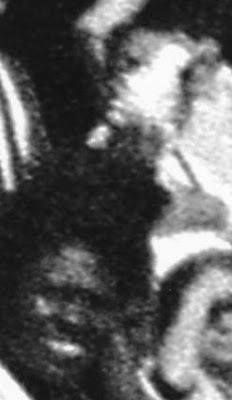 There is no other photographic outcome like it in the entire world. And to attribute it to Brownian motion is ridiculous and farcical. It is absurd. It is preposterous. And that discussion of stand development on those various photo forums has absolutely nothing to do with it because stand development was not done to develop the Altgens photo.

Renatus wrote:We aggitate in order to prevent stains on the film right? and also to givi it a little more contrast right?So you aggitate full 1st min of the development and the 5 sec each sec


Light Writer:
The purpose of agitation is to get fresh developer to replace the exhausted developer (one molecule next to the emulsion). Also when you are consistent you can "tweek" the development by agitating differently. The action of the developer is enhanced by the agitation, because brownian motion alone will not replace the exhausted developer in a consistent manner. One of the results of over agitating 35mm film too much is to get sprocket-hole-streaks on the film, where the developer is shooting out of the holes (under pressure of agitation) and thus overdeveloping portions near the sprockets, in the direction of travel of th developer. My personal techniqe is to agitate constanly for the first minute, then 5 seconds every 30 seconds. Each film's instructions will be slightly different, many say agigate for first 30 seconds, then 10 seconds every minute. This is part of why flame wars develop about agitation. Use what ever way works for you, but do it consistently.

RC: So, he claims there that you agitate because "brownian motion alone will not replace the exhausted developer in a consistent manner." But, he's not claiming that brownian motion causes distortion and anomalies in photos, which is what our discussion is about, which is what Judyth Baker claimed. She claimed that: lines and smears could be caused by brownian motion, and this guy's comment has no bearing on it whatsoever.

I can provide a different example of the same thing from an ordinary everyday life experience. When you use Wite-Out you can make it dry faster if you wave the sheet of paper. Why? It's because you are replacing the air molecules around the liquid. The local air molecules get saturated quickly, so if you replace them by waving the paper which moves the air, it dries faster. Now, it would dry anyway if you didn't do that. Paint on a wall dries without agitating the wall, doesn't it? But, when you use Wite-Out, you usually want to write over it, which you can't do until it's dry, and so, you shake it. We tend to be in a hurry. We tend to be impatient. So, we shake it.

Hey Punk. You're bad. You're bad to the bone. It's no wonder George Bush could get you to go over to Iraq to kill Iraqis. How many did you kill? Any idea? Do you even care? You're just a hit man. You were a hit man then, and you're a hit man now. You're just an evil punk.